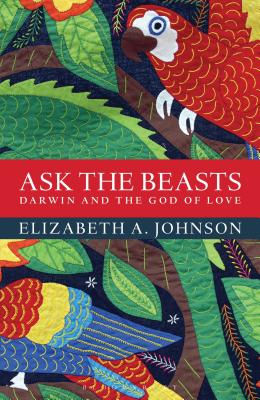 Darwin and the God of Love

An examination of the relationship between faith in God and the concept of ecological care within a crisis of biodiversity.

For millennia plant and animal species have received little sustained attention as subjects of Christian theology and ethics in their own right. In Ask the Beasts: Darwin and the God of Love, Elizabeth A. Johnson concludes that love of the natural world is an intrinsic element of faith in God and that far from being an add-on, ecological care is at the center of moral life.

Focused on the human dilemma of sin and redemptive grace, theology has considered the doctrine of creation to be mainly an overture to the main drama of human being's relationship to God. What value does the natural world have within the framework of religious belief? The crisis of biodiversity in our day, when species are going extinct at more than 1,000 times the natural rate, renders this question acutely important.Standard perspectives need to be realigned; theology needs to look out of the window, so to speak as well as in the mirror.


Praise For Ask the Beasts: Darwin and the God of Love…

“Throughout her acclaimed career as a theologian, Sr. Elizabeth Johnson has devoted much of her scholarship to contemplating God's relationship with human beings. [In] Ask the Beasts: Darwin and the God of Love, Johnson turns her gaze upon God's relationship with the nonhumans of the world.” —Jamie Manson, National Catholic Reporter

“Besides borrowing from other environmentally conscious religious thinkers, Johnson draws key insights from Darwin, whose The Origin of Species opens a vision of a planetwide community of life. As readers contemplate the human heedlessness that has pushed many species to (near) extinction, they will understand the urgency of Johnson's ecological appeal. The Catholic Bishops' censure of Johnson's Quest for the Living God may make the orthodox wary. But a writer who stirs controversy never lacks readers.” —Bryce Christensen, Booklist

“Engrossing and wonderfully realized, this is a book to be read and loved.” —Publishers Weekly

“This Spirit-imbued vision of creation yields the kind of strong ecological ethic demanded in our day. … Ask the Beasts presents a deeply sacramental, incarnational view of the natural world and our place in it.” – Stephen J. Pope, The Journal of Religion

“Elizabeth Johnson's beautifully written book shows us, more convincingly than any other book that I have ever read, how science and religion can engage in a dialogue which is mutually illuminating. She shows how the narratives of evolution and salvation are not just parallel stories but shed light on each other. The unpredictable creativity of matter is disclosed as the sphere of the working of the ever-fresh Holy Spirit. She brings us to a new understanding of the role of pain and death, and radically deepens our understanding of a cosmic redemption. I will read the Bible with a renewed understanding and pleasure. I have rarely enjoyed a book of theology more.” —Timothy Radcliffe, O.P.

Elizabeth A. Johnson, C.S.J., is distinguished Professor of Theology at Fordham University. She has received numerous awards, including the Louisville Grawemeyer Award in Religion for She Who Is (1993), the American Academy of Religion Award for Excellence in the Study of Religion for Friends of God and Prophets (1999), and the Book Award of the College Theology Society for Truly Our Sister (2004). She was also the recipient of the John Courtney Murray Award of the Catholic Theological Society of America, the Jerome Award of the Catholic Library Association, and the Monika K. Hellwig Award of the Association of Catholic Colleges and Universities.
Loading...
or
Not Currently Available for Direct Purchase