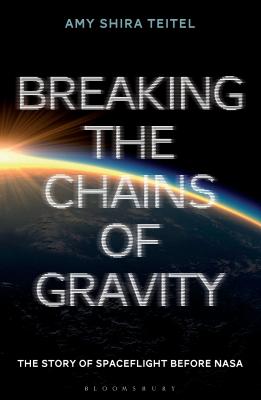 Breaking the Chains of Gravity (Paperback)

The Story of Spaceflight before NASA

The revealing backstory of spaceflight before the establishment of NASA.

NASA's history is a familiar story, culminating with the agency successfully landing men on the moon in 1969, but its prehistory is an important and rarely told tale. Breaking the Chains of Gravity looks at the evolving roots of America's space program--the scientific advances, the personalities, and the rivalries between the various arms of the United States military.

America's space agency drew together some of the best minds the non-Soviet world had to offer. The National Advisory Committee for Aeronautics and the U.S. Air Force, meanwhile, brought rocket technology into the world of manned flight.

The road to NASA and successful spaceflight was paved by fascinating stories and characters. At the end of World War II, Wernher von Braun escaped Nazi Germany and came to America where he began developing missiles for the United States Army. Ten years after he created the V-2 missile, his Jupiter rocket was the only one capable of launching a satellite into orbit. NACA test pilots like Neil Armstrong flew cutting-edge aircraft in the thin upper atmosphere while Air Force pilots rode to the fringes of space in balloons to see how humans handled radiation at high altitude. After the Soviet launch of Sputnik in 1957, getting a man in space suddenly became a national imperative, leading President Dwight D. Eisenhower to pull various pieces together to create the National Aeronautics and Space Administration.

Amy Shira Teitel is an author and expert in the history of science, with a lifelong passion for spaceflight. An accomplished science communicator and active blogger, she makes regular appearances on Discovery News and Al-Jazeera, and has her own blog, Vintage Space, at http://amyshirateitel.com.

Praise For Breaking the Chains of Gravity: The Story of Spaceflight before NASA…

"Teitel . . . illuminates the foundations of American spaceflight with this exceptional and detailed ‘prehistory’ of the field . . . fascinating new territory, filled with a galaxy of lively characters." - Publishers Weekly

"This is a good treatment of the origins of the US space program." - CHOICE magazine

"Breaking the Chains of Gravity tells the story of how we began to explore the cosmos--the lessons we had to learn the hard way--and shows why space exploration even today remains anything but routine." - Bobak Ferdowsi, Flight Director, Mars Science Laboratory

"The Space Race wasn't all about tall, silvery rockets and moon landings. Before America and Russia squared off in an expensive race for glory, a number of quirky, inventive personalities pursued their own goals, with little support. Often facing ridicule for ideas that seemed outlandish to most, they nevertheless laid the foundations for humanity's greatest achievements. Amy Shira Teitel ably chronicles these early efforts to reach beyond our home planet." - Francis French, author of IN THE SHADOW OF THE MOON

"Teitel delivers on detail, such as the exploits of supersonic-flight pioneer Chuck Yeager." - Nature