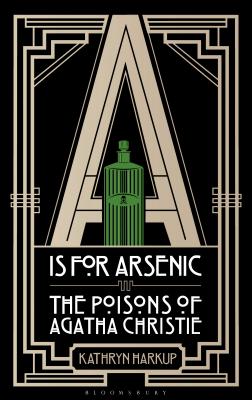 A is for Arsenic

The Poisons of Agatha Christie

People are fascinated by murder. The popularity of murder mystery books, TV series, and even board games shows that there is an appetite for death, and the more unusual or macabre the method, the better. With gunshots or stabbings the cause of death is obvious, but poisons are inherently more mysterious. How are some compounds so deadly in such tiny amounts?

Agatha Christie used poison to kill her characters more often than any other crime fiction writer. The poison was a central part of the novel, and her choice of deadly substances was far from random; the chemical and physiological characteristics of each poison provide vital clues to the discovery of the murderer. Christie demonstrated her extensive chemical knowledge (much of it gleaned by working in a pharmacy during both world wars) in many of her novels, but this is rarely appreciated by the reader.

Written by former research chemist Kathryn Harkup, each chapter takes a different novel and investigates the poison used by the murderer. Fact- and fun-packed, A is for Arsenic looks at why certain chemicals kill, how they interact with the body, and the feasibility of obtaining, administering, and detecting these poisons, both when Christie was writing and today.


Praise For A is for Arsenic: The Poisons of Agatha Christie…

“[An] intriguing and illuminating examination of Christie's use of poisons in her mysteries . . . This compilation should please mystery fans, true crime readers, and lovers of popular science.” —Publishers Weekly

“This would be a perfect reference for anyone writing murder mysteries and is scientific enough to be used as a textbook . . . The addition of real-life cases and comparisons to Christie's works make this a nice little murder mystery of its own. Fear not, she's careful not to spoil the endings of the classic novels.” —Kirkus

“Remember the homicidal glee of that old Cary Grant movie 'Arsenic and Old Lace'? Those adorable aged aunts, earnestly luring lonely old men to their house so they could knock them off with poison-laced elderberry wine? If you liked that, you'll like 'A Is for Arsenic: The Poisons of Agatha Christie'; it has a little of that lethal charm . . . And while it's essentially good book-club-style fun, the book has a practical application: For every poison, it offers some antidotes.” —Washington Post

“You don’t have to be familiar with the likes of Miss Marple or Hercule Poirot, however, to enjoy Harkup's detailed, near-gleeful dip into what she calls Christie's 'deadly dispensary.'” —Discover Magazine

Kathryn Harkup is a chemist and author. Kathryn completed a PhD then a postdoc at the University of York before realising that talking, writing and demonstrating science appealed far more than spending hours slaving over a hot fume-hood. Kathryn went on to run outreach in engineering, computing, physics and maths at the University of Surrey, which involved writing talks on science and engineering topics that would appeal to bored teenagers, and she is now a science communicator delivering talks and workshops on the quirky side of science.
Loading...
or
Not Currently Available for Direct Purchase