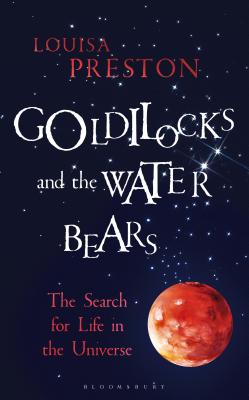 Goldilocks and the Water Bears (Hardcover)

The Search for Life in the Universe

Astrobiology is the study of life in the universe from its origins to its evolution into intelligent sentient beings. All life as we know it is carbon-based, reliant on sources of liquid water and energy for its survival, and as far as we are aware, exists only on Earth.

Our planet occupies a unique spot in the solar system. It is just the right distance from the Sun--within the so-called Goldilocks Zone--to be not too hot or too cold for liquid water to be stable on its surface, which, together with a protective shielding atmosphere, allowed the four-billion-year journey from a single-celled organism to an upright humanoid species. Most of primordial life, if seen today, would be classified as “alien,” as it bears little resemblance to anything that currently exists.

We can learn much about the possibilities of extraterrestrial life by studying the conveyer belt of life forms from our planet's history and by exploring organisms still present in harsh environments on Earth that mimic those on other worlds. These organisms, called "extremophiles," are directing our search for alien life throughout the solar system and beyond. Could we one day find Earth's toughest animal, the microscopic water bear, living under the surface of another world? Goldilocks and the Water Bears is an accessible introduction to the most fascinating of all the astro-sciences--the quest to learn whether we are alone in the universe.

Louisa Preston is an astrobiologist and planetary geologist whose research has included the search for signs of life that could survive the harsh environments of Mars. She has a Ph.D. in astrobiology and planetary geology from Imperial College London and has completed two postdocs, working on space-mission simulations and the creation of a global database of Martian and lunar analog environments for the European Space Agency. This is her first book, and she lives in London, England.

Praise For Goldilocks and the Water Bears: The Search for Life in the Universe…

"Ably distilling complicated science into digestible portions, Preston’s balance of wonkiness and wide appeal is also 'just right' and suited for anyone who’s interested in the Curiosity rover’s exploits on Mars and wants to learn more." - Booklist

"Preston surveys the emerging field of astrobiology with scholarly depth and layman accessibility . . . Goldilocks and the Water Bears brings a lofty, sometimes exaggerated topic down to Earth in an enjoyable way." - Tobias Mutter, Shelf Awareness

"Fascinating . . . It's a compelling book to read at this moment, as man-made climate change is throwing planetary systems off balance. In her brief history of the Earth, and of the other rocks that hurtle around space with us, Preston shows just how very lucky we are to live on a planet that is--for now at least--just right." - VICE