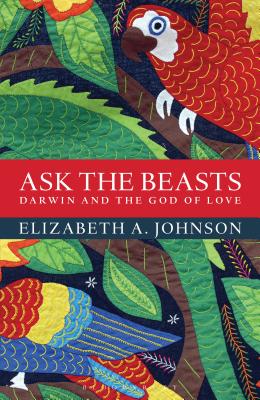 Darwin and the God of Love

An examination of the relationship between faith in God and the concept of ecological care within a crisis of biodiversity.

For millennia plant and animal species have received little sustained attention as subjects of Christian theology and ethics in their own right. In Ask the Beasts: Darwin and the God of Love, Elizabeth A. Johnson concludes that love of the natural world is an intrinsic element of faith in God and that far from being an add-on, ecological care is at the center of moral life.

Focused on the human dilemma of sin and redemptive grace, theology has considered the doctrine of creation to be mainly an overture to the main drama of human being's relationship to God. What value does the natural world have within the framework of religious belief? The crisis of biodiversity in our day, when species are going extinct at more than 1,000 times the natural rate, renders this question acutely important.Standard perspectives need to be realigned; theology needs to look out of the window, so to speak as well as in the mirror.


Praise For Ask the Beasts: Darwin and the God of Love…

“In Ask the Beasts Elisabeth Johnson combines erudition and theological reflection, a pastoral passion and ethical commitment to show that Darwinian theory of evolution need not stand against a religious belief in God. Instead, she provides a theology of creation that not only integrates an understanding of evolution with a belief in the presence of God's love and grace in the world, but also encourages us to take up our common responsibility for the earth, its environment, and all its living creatures. The clarity of her exposition and her ability to bring classical theological affirmations to bear on contemporary issues makes this book an accessible and required reading on the burning issues of faith, science, and ecological well-being.” —

“Elizabeth Johnson's beautifully written book shows us, more convincingly than any other book that I have ever read, how science and religion can engage in a dialogue which is mutually illuminating. She shows how the narratives of evolution and salvation are not just parallel stories but shed light on each other. The unpredictable creativity of matter is disclosed as the sphere of the working of the ever-fresh Holy Spirit. She brings us to a new understanding of the role of pain and death, and radically deepens our understanding of a cosmic redemption. I will read the Bible with a renewed understanding and pleasure. I have rarely enjoyed a book of theology more.” —Timothy Radcliffe, O.P.

“This Spirit-imbued vision of creation yields the kind of strong ecological ethic demanded in our day. … Ask the Beasts presents a deeply sacramental, incarnational view of the natural world and our place in it.” – Stephen J. Pope, The Journal of Religion

“Johnson's work is vivifying, encouraging not only Christian thoughtfulness but also reverence toward the ecosystem on its behalf. An overdue reconciliation of religious belief to scientific cognizance, Ask the Beasts should become the benchmark for conversations between the disciplines.” —ForeWord Reviews

“In constructing her “dialogue between Charles Darwin's account of the origin of species and the Christian story of the ineffable God of mercy and love recounted in the Nicene Creed” (xv), Johnson writes so skillfully in her judicious use of a broad swathe of traditional and contemporary literature, and also so beautifully, that this book may well stand out as one of the most important to come from the early twenty-first century.” —Worship, V. 89 N. 2.

“Like Darwin marveling at the web of life observed in the tangle of vegetation, insects, birds, and animals along a riverbank and at discovering the 'grandeur' of a view of life that is dynamic rather than static, Johnson's stance is most often one of profound wonder at the complexity, beauty and mystery of creation and of its Creator.” —

“Like Darwin marveling at the web of life observed in the tangle of vegetation, insects, birds, and animals along a riverbank and at discovering the “grandeur” of a view of life that is dynamic rather than static, Johnson's stance is most often one of profound wonder at the complexity, beauty and mystery of creation and of its Creator.” —Anglican Theological Review

“Elizabeth Johnson's most recent publication demonstrates not only her facility and keen insight on matters of theology, but also her knowledge of evolutionary theory as introduced by Darwin and updated by other scholars. Johnson is a clear and persuasive writer who substantiates her work with footnotes and an eleven-page select bibliography. … Ask the Beasts forwards the conversation between science and theology and is well-suited for any library, but particularly for a theological library.” —Catholic Library World

Elizabeth A. Johnson, C.S.J., is distinguished Professor of Theology at Fordham University. She has received numerous awards, including the Louisville Grawemeyer Award in Religion for She Who Is (1993), the American Academy of Religion Award for Excellence in the Study of Religion for Friends of God and Prophets (1999), and the Book Award of the College Theology Society for Truly Our Sister (2004). She was also the recipient of the John Courtney Murray Award of the Catholic Theological Society of America, the Jerome Award of the Catholic Library Association, and the Monika K. Hellwig Award of the Association of Catholic Colleges and Universities.
Loading...
or support indie stores by buying on