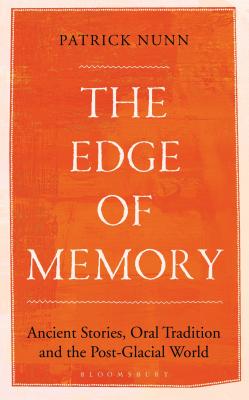 The Edge of Memory

In The Edge of Memory, Patrick Nunn explores the science in folk history. He looks at ancient tales and traditions that may be rooted in scientifically verifiable fact, and can be explored via geological evidence, such as the Biblical Flood.

We all know those stories that have been told in our families for generations. The ones that start "Have I ever told you about your great, great Uncle …?" In some cultures these stories have been passed down for thousands of years, and often reveal significant information about how the surrounding environment has changed and the effect it has had on societies--from stories referring to coastal drowning to the devastation caused by meteorite falls.

Take Australian folklore, for instance. People arrived in Australia more than 60,000 years ago, and the need to survive led to the development of knowledge that was captured orally in stories passed down through the generations. These stories conveyed both practical information and recorded history, and they frequently made reference to a coastline that was very different to the one we recognize today. In at least 21 different communities along the fringe of Australia, flood stories were recorded by European anthropologists, missionaries, and others. They described a lost landscape that is now under as much as 100 feet of ocean. And these folk traditions are backed up by hard science. Geologists are now starting to corroborate the tales through study of climatic data, sediments and land forms; the evidence was there in the stories, but until recently, nobody was listening.

The Edge of Memory is an important book that explores the wider implications for our knowledge of how human society has developed through the millennia.


Praise For The Edge of Memory: Ancient Stories, Oral Tradition and the Post-Glacial World…

“. . . a surprising, well-supported perspective on Earth's distant past.” —Kirkus

"An important look at how traditional and indigenous folk stories and knowledge are full of valuable science about floods, shifting coastlines and other changing environments--in other words, information that can help us learn to adapt to future threats." - EcoWatch

“In this sweeping, masterful volume, Nunn stitches together evidence from geology, anthropology, archaeology, linguistics, history and geography to bring to our collective attention the many durable myths and legends of Indigenous oral traditions. If you care about the future of the planet, and our survival on it, The Edge of Memory is a must-read book.” —Chris Gibson, Editor-in-Chief, Australian Geographer, and Professor of Geography, University of Wollongong, Australia

“Nunn's book is the newest jewel in the recent chain of research showing, through geological verification, that human oral traditions often record real events back 10,000 years and more. He shows that such ancient fact-bearing stories, usually dismissed as “just myths”, occur the world around. The book is an engagingly written must-read: I couldn't put it down.” —Elizabeth Wayland Barber, co-author of When They Severed Earth from Sky: How the Human Mind Shapes Myth

“A very important book that shows how non-literate people preserved their observations of memorable events for as much as ten millennia, and their recollections can also help us to face the challenges of environmental changes today.” —Rita Compatangelo-Soussignan, Professor of Ancient History at Le Mans University, France

Patrick has more than 230 peer-reviewed publications to his credit, including several books, including Vanished Islands and Hidden Continents of the Pacific (University of Hawai'i Press), which was named by the American Library Association as one of the Best of the Best from the University Presses in 2009.