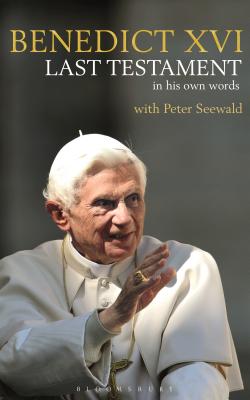 The story of the first Pope to resign in over 700 years.

Pope Benedict made history when he became the first Pope in over 700 years to resign from office, stunning the Catholic Church the world over. At last, Last Testament is a stunning and frank autobiography from the shy and private man who has since remained cloistered in a former convent in the Vatican gardens. In interviews with Peter Seewald, the Pope Emeritus breaks his silence on corruption within the Vatican, clerical sex scandals, and the challenge of reforming the Papacy.

In these interviews, Benedict discusses such wide-ranging controversies as:

On a more personal level he writes with great warmth of his successor Pope Francis, who he admits has a popular touch, a star quality which Benedict himself has lacked. Much controversy still surrounds Pope Benedict's Papacy--in this book he addresses these controversies and reveals how at his late age, governing and reforming the Papacy and particularly the Vatican, was beyond him.

Praise For Last Testament: In His Own Words…

"The most sincere interview which Benedict XVI has given . . . It is gripping from the very beginning . . . An exquisite conversation between two people who know each other, like each other, and have mutual respect for one another . . . A fantastic book which should not be overlooked by any open-minded Catholic who wishes to learn from our great tradition but also wants to progress with the Church." - The Catholic Times

"Throughout there are moments of breathtaking candor . . . it's stunning to realize you're reading the inner thoughts--and confessions--of a former pope now speaking without the weight of that papal mantle . . . The portrait here is one that deepens and defends the place of Benedict in history." - Chicago Tribune

"There are beautiful moments in the book." - The Huffington Post

"The most revealing book yet on Benedict XVI . . . Seewald has gathered in perhaps the finest harvest yet. For more than a decade I have read everything I can about Benedict XVI, but I was amazed by the revelations in this new book." - Catholic Herald

"Joseph Ratzinger has certainly been a great theologian . . . Last Testament [is] revealing about who this underrated man really is . . . He bears comparison with the greatest doctors of the Church." - Prospect

"Prophetic and important analysis. The Testament is a fascinating read for this and so much more, and there is a consistent note of joyful and solid faith which is an inspiration." - Joanna Bogle, The Catholic World Report

"I can’t begin to describe the influence that the writings of Joseph Ratzinger have had on me . . . but suffice it to say that this beautiful and compelling book may well be the final gem in the crown of his work that we’ve all been waiting for." - Paul Senz, The Catholic World Report

"[Last Testament] deepens our sense of the personality, gentleness, humor, and subtlety of the pope emeritus." - First Things

"The book is striking on a number of levels . . . The first 100 pages alone make the book worth purchasing, generously sprinkled as it is with these tiny flakes of biographical intimacy, which can surprise as much as they move . . . One other pleasant aspect of reading this book, especially when one approaches the second half, has been the little displays of wit and sometimes attitude." - Patheos

"Offers readers a journey through the theological life of the retired pope." - Superior Catholic Herald