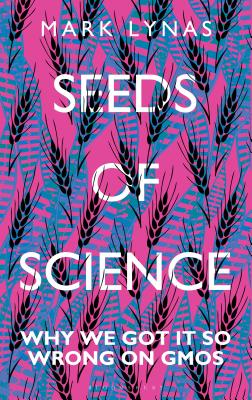 Why We Got It So Wrong On GMOs

In Seeds of Science, eco-activist Mark Lynas lifts the lid on the controversial story and misunderstood science of GMOs. In the mid-1990s, as the global media stirred up a panic about the risks of genetically modified crops, Lynas destroyed crop fields and spoke out in the press…until he realized he was wrong. This book explains why.

Twenty years after GMO crops became a source of controversy, scientists are working hard to devise new farming methods that will meet the world's food requirements while causing the minimum amount of ecological harm. We're now discovering that the environmentalist mainstream might have misjudged the GMO issue completely, and as a consequence we have forfeited two decades' worth of scientific progress in perhaps the most vital area of human need: food.

No one is more aware of this fact than Mark Lynas. Starting out as one of the leading activists in the fight against GMOs-from destroying experimental crop fields to leading the charge in the press-in 2013 Lynas famously admitted that he got it all wrong. Lynas takes us back to the origins of the technology, and examines the histories of the people and companies who pioneered it. He explains what lead him to question his assumptions on GMOs, and how he is currently tracking poverty by using genetic modification to encourage better harvests.

Seeds of Science provides an explanation of the research that has enabled this technology-something which led to countless misconceptions about a field that could provide perhaps the only solution to a planet with a population of ten billion people.

Mark Lynas is a journalist, campaigner and broadcast commentator on environmental issues. He is a contributor to the New Statesman, Ecologist, Granta and Geographical magazines, and the Guardian and Observer in the UK. He lives in Oxford, England.

Praise For Seeds of Science: Why We Got It So Wrong On GMOs…

". . . full of factoids that’ll make you rethink a highly debated subject, and also what’s really going on with those giant apples that don’t bruise or brown." - Bonappetit.com

"Lynas may have been brash and insistent in the past, but here, he is deliberate, thoughtful, and committed to setting the record straight regarding GMOs." - Booklist

"Partly a level-headed look at the benefits as well as the downsides of genetic modification, and partly a personal account of how Mark came to believe that the scientific method was, on the whole, not a bad way of analysing questions of crop production and farming. I found it riveting, largely because he writes so well and so open-mindedly, and I warmly recommend it." - Philip Pullman

"Mark Lynas tells the remarkable story of a mass delusion fuelled by primitive folk-science intuitions, sacred values, and disinformation from some of our most sainted organizations. His exposé is an important contribution to an issue with enormous potential for benefiting humanity, and a gripping account of the tensions that can surround technological progress."- Steven Pinker, Johnstone Professor of Psychology, Harvard University, and the author of The Better Angels of Our Nature and Enlightenment Now

"A gripping story of how a passionate troublemaker became an equally passionate campaigner for the facts. Seeds of Science is not only a compellingly-researched argument, it is the tale of how Mark Lynas's life changed. Reading it may change your life, too." - Tim Harford, author of Fifty Things That Made the Modern Economy and presenter of More or Less

"Mark Lynas is a courageous writer whose evidence-based turnaround on GMOs should be a lesson to all environmentalists. A must-read for anyone who cares about our future." - Simon Singh, popular science writer and author of The Simpsons and Their Mathematical Secrets