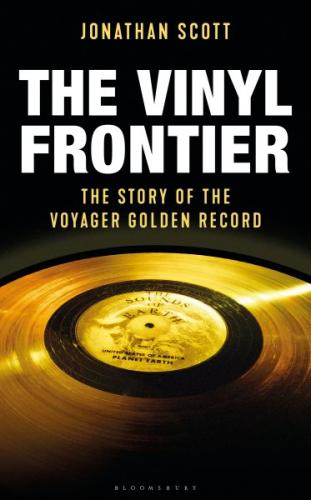 The Story of NASA's Interstellar Mixtape

The fascinating story behind the mission, music, and message of NASA's Voyager Golden Record--humanity's message to the stars.

In 1977, a team led by the great Carl Sagan was assembled to create a record that would travel to the stars on NASA’s Voyager probe. The Vinyl Frontier reveals the inside story of how the record was created, from the first phone call to the final launch, when Voyager 1 and 2 left Earth with a playlist that would represent humanity to any future alien races that come into contact with the probe. Each song, sound and picture that made the final cut has a story to tell.

The Golden Record is a 90-minute playlist of music from across the globe, a sound essay of life on Earth, spoken greetings in multiple languages, and more than 100 photographs, all painstakingly chosen by Sagan and his team to create an aliens' guide to Earthlings. The final playlist contains music written and performed by well-known names such as Bach, Beethoven, Chuck Berry and Blind Willie Johnson, as well as music from China, India and more remote cultures, such as a community in Small Malaita in the Solomon Islands.

Through interviews with all of the key players involved with the record, this book pieces together the whole story of the Golden Record. It addresses the myth that the Beatles were left off of the record because of copyright reasons and will include new information about US president Jimmy Carter’s role in the record, as well as many other fascinating insights that have never been reported before. It also tells the love story between Carl Sagan and the project’s creative director Ann Druyan that flourishes as the record is being created.

The Golden Record is more than just a time capsule. It is a unique combination of science and art, and a testament to the genius of its driving force, the great polymath Carl Sagan.


Praise For The Vinyl Frontier: The Story of NASA's Interstellar Mixtape…

“Both a detailed history of and a thoughtful exegesis on caution-by-committee and the sometimes remarkable synergy between art and science. Crucially, Scott's narrative blends extraterrestrial wonder with earthbound charm and brims with poignant revelations. (4*)” —Mojo

“You may have heard of the Voyager Golden Record, but Scott's illuminating backstory brings a new appreciation to this simple object. It's not just a record. It's science's most thoughtful and optimistic act.” —Amy Shira Teitel, author of Breaking the Chains of Gravity

“An entertaining, compelling, brilliantly-researched and inspiring account of the Voyager spaceship's curious passenger, the Golden Record, and the wonderful team of dreamers who made it happen.” —Emer Reynolds, writer and director of The Farthest

“Music journalist and Record Collector contributor Scott creates a high-energy, interplanetary pop song of a book...Delivered with effortless grace, this buoyant look at one of NASA's most unusual but oft-overlooked efforts will appeal to music fans and astronomy buffs alike.” —Publishers Weekly starred reviews

“The story of the Voyager record is fascinating...Scott makes the tale even more intriguing with occasional asides
and well-deserved moments of disbelief...Insightful, engaging, and thoroughly enjoyable, this is the sort of popular history book clubs adore.” —Colleen Mondor, Booklist starred reviews

“The Vinyl Frontier: The Story of the Voyager Golden Record is a fascinating look at the group who created the record with insight into the music and photographs that were selected...Scott does an excellent job of discussing the facts in an entertaining and conversational way.” —Kyra Leseberg, Roots and Reads

“The unknown and untold story behind the Voyager golden record. Jonathan Scott has done a superb job at recounting a phase of U.S. space history few know about.” —Eric Nagel, NetGalley

“...Scott has the benefit of a wider range of information and sources and an objective view of the process. This is also a very relatable and human way to approach deep space exploration. VERDICT: A must for all libraries.” —Kirkus starred reviews

"The Vinyl Frontier tells the tale well, doing a particularly good job of giving a feel for the people involved and the day-to-day aspects of the project...The Vinyl Frontier’s major contribution to the Voyager story is showing how many different narratives surround it..." - Matthew Stanley, Science

"Jonathan Scott, author of a new history of the Voyager Golden Record called The Vinyl Frontier, is a music writer who's edited books on Prince and Cher. His description of the music selection process alone is worth the book's price, but it was clear from the beginning that music couldn't be the only audio on the record." - Jay Gabler, The Current, Minnesota Public Radio

"The Golden Record is more than just a time capsule. It is a unique combination of science and art, and a testament to the genius of its driving force, the great polymath Carl Sagan." - Eric Alper, ThatEricAlper.com

"Scott’s book is a testimony to the amount of work that Sagan, who died in 1996, and his team put into the Golden Record...And while this is about the production of the record and not the Voyager mission itself, Scott masters the technical details, often with a touch of humor." - James Hill, The Washington Post

"More than a time capsule, Jonathan Scott describes in this book a brilliant combination of science and art, which together created a weird but wonderful artefact compiled by an amazing group of people. Created from a strange marriage of politics, bureaucracy, budget, ambition, innovation, and beauty, Scott describes a portrait of humanity that is still travelling out among the stars." - The Nerd Daily

"More than four decades ago, a team led by the famous Cornell astronomer Carl Sagan — himself a devout believer that we were not alone in the cosmos — created a message from Earth to be sent into the heavens on the Voyager spacecraft. This message, encoded on what is known as the Golden Record, is still hurtling through space, destination relatively unknown, recipient of the message completely unknown…Music writer and self-described astronomy geek Jonathan Scott is our cheerful tour guide on this mission, and The Vinyl Frontier is our comprehensive and comprehensible itinerary." - Los Angeles Times

"[Scott] has done his homework. He has the nerd’s determination to track down details, to badger surviving protagonists with questions no one else has asked." - Evan Eisenberg, The Wall Street Journal

Jonathan Scott is a music writer and self confessed astronomy geek.


Formerly a contributing editor to Record Collector magazine, he has edited books about Prince, Cher and the San Francisco psych explosion, and written about Nirvana, the Pogues, the Venga Boys, Sir Patrick Moore and Sir Isaac Newton in a variety of magazines.


He received his first telescope aged eight, using it to track Halley's Comet in 1986. Having followed Voyager's planetary fly-bys throughout his childhood, he first got to write about the missions in 2004. If he'd been in charge of the Voyager Golden Record, aliens would assume humanity had three chords.