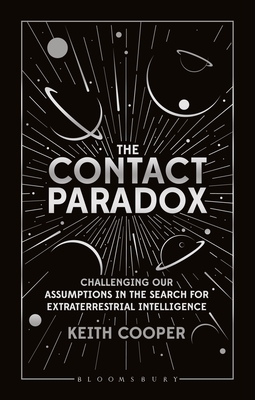 Challenging our Assumptions in the Search for Extraterrestrial Intelligence

Inside the difficult questions about humanity's search for extraterrestrial intelligence.

What will happen if humanity makes contact with another civilization on a different planet? In The Contact Paradox, space journalist Keith Cooper tackles some of the myths and assumptions that underlie SETI--the Search for Extraterrestrial Intelligence.

In 1974 a message was beamed towards the stars by the giant Arecibo telescope in Puerto Rico, a brief blast of radio waves designed to alert extraterrestrial civilizations to our existence. Of course, we don't know if such civilizations really exist. But for the past six decades a small cadre of researchers have been on a quest to find out, as part of SETI, the search for extraterrestrial intelligence.

The silence from the stars is prompting some researchers, inspired by the Arecibo transmission, to transmit more messages into space, in an effort to provoke a response from any civilizations out there that might otherwise be staying quiet. However, the act of transmitting raises troubling questions about the process of contact. We look for qualities such as altruism and intelligence in extraterrestrial life, but what do these mean to humankind? Can we learn something about our own history when we explore what happens when two civilizations come into contact? Finally, do the answers tell us that it is safe to transmit, even though we know nothing about extraterrestrial life, or as Stephen Hawking argued, are we placing humanity in jeopardy by doing so?

In The Contact Paradox, author Keith Cooper looks at how far SETI has come since its modest beginnings, and where it is going, by speaking to the leading names in the field and beyond. SETI forces us to confront our nature in a way that we seldom have before--where did we come from, where are we going, and who are we in the cosmic context of things? This book considers the assumptions that we make in our search for extraterrestrial life, and explores how those assumptions can teach us about ourselves.


Praise For The Contact Paradox: Challenging our Assumptions in the Search for Extraterrestrial Intelligence…

"The great virtue of Cooper's discussion is that it gives readers a picture of living science. A Sagan of books." - Washington Post

"There is growing interest in the possibility of 'alien intelligence', and in how best to search for it. Keith Cooper's broad and balanced perspective on current debates and programmes deserves wide readership." - Martin Rees

"A thorough and timely overview of the latest thinking in SETI and its controversial offspring, METI. This is a stimulating, provocative and ultimately optimistic enquiry into the biggest question we're ever likely to answer: are we alone?" - Alastair Reynolds, Science Fiction Author

"The mystery of humanity's place in the universe enthrals millions. Whatever strangeness prevails out there, shouldn't we explore, at least with curious minds? The Contact Paradox surveys what science has revealed about this odd cosmos, the vastness of our ignorance and curiosity about any 'others' out there, and some of the steps we can take - even now - to prepare." - David Brin, Hugo and Nebula award-winning author

"In an engrossing narrative, Keith Cooper dissembles our expectations for intelligent alien life down to a set of assumptions we can gorge on with scientific precision. It is a meal guaranteed to expand what you thought was possible, and brings the search for life beyond the Earth from the realm of fiction to that of a scientific endeavour." - Elizabeth Tasker, Associate Professor at the Japan Aerospace Exploration Agency (JAXA), and author of The Planet Factory.

"With concise and approachable writing, Cooper crafts a worthwhile popular science work about questions that, as scientists continually improve the human capacity for gathering information about the rest of the universe, are becoming increasingly important." - Starred review from Publishers Weekly

"The great virtue of Cooper's discussion is that it gives readers a picture of living science. Cooper shows us scientists disagreeing, presenting and supporting alternate theories and gives clear discussions of the differing views, letting the science live." - Arkansas Democrat Gazette

Keith Cooper is the Editor of Astronomy Now. He has held this role since 2006, and is also Editor of the NASA-sponsored Astrobiology Magazine. Keith specializes in writing about astrophysics, planetary science, cosmology and astrobiology, and he has written for New Scientist, Sky & Telescope, Physics World, Centauri Dreams and the Journal of the British Interplanetary Society.
Loading...
or support indie stores by buying on