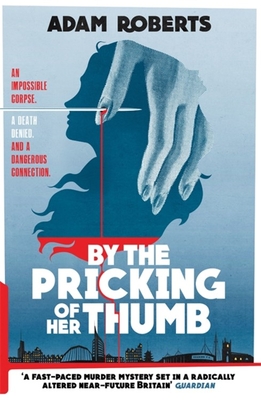 By the Pricking of Her Thumb (Hardcover)

Private Investigator Alma is caught up in another impossible murder. One of the world's four richest people may be dead - but nobody is sure which one. Hired to discover the truth behind the increasingly bizarre behaviour of the ultra-rich, Alma must juggle treating her terminally ill lover with a case which may not have a victim.
Inspired by the films of Kubrick, this stand-alone novel returns to the near-future of THE REAL-TOWN MURDERS, and puts Alma on a path to a world she can barely understand. Witty, moving and with a mystery deep at its heart, this novel again shows Adam Roberts' mastery of the form.

Adam Roberts is commonly described as one of the UK's most important writers of SF. He is the author of numerous novels and literary parodies. He is Professor of 19th Century Literature at Royal Holloway, London University and has written a number of critical works on both SF and 19th Century poetry. He is a contributor to the SF ENCYCLOPEDIA.

Praise For By the Pricking of Her Thumb…

Written in a witty, playful and almost teasing style, this is an impressive novel of ideas and a moving love story as well as a tense mystery thriller.—MORNING STAR

Adam Roberts is very good at spinning weird crime tales... this is one to watch out for.—STARBURST
or
Buy Here
Copyright © 2020 American Booksellers Association