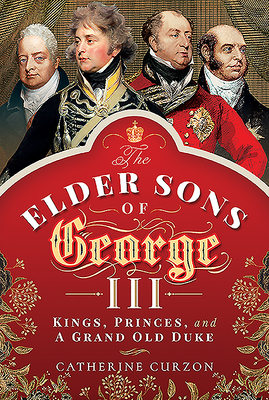 The Elder Sons of George III

Using original letters, diaries and newspapers, the royal family and the insular world of the Georgian court are brought vividly back to life.

For nearly 60 years, King George III reigned over a tumultuous kingdom. His health and realm were in turmoil, while family life held challenges of its own. From the corpulent Prinny and the Grand Old Duke of York, to a king who battled the Lords and the disciplinarian Duke of Kent, this is the story of the elder sons of George III.

Born over the course of half a decade of upheaval, George, Frederick, William, and Edward defined an era. Their scandals intrigued the nation and their efforts to build lives away from the shadow of their impossibly pious parents led them down diverse paths. Whether devoting their lives to the military or to pleasure, every moment was captured in the full glare of the spotlight.

The sons of George III were prepared from infancy to take their place on the world's stage, but as the king's health failed and the country lurched from one drama to the next, they found that duty was easier said than done. With scandalous romances, illegal marriages, rumors of corruption and even the odd kidnapping plot, their lives were as breathless as they were dramatic. In The Elder Sons of George III: Kings, Princes, and a Grand Old Duke, travel from Great Britain to America and on to Hanover in the company of princes who were sometimes scandalous, sometimes sensational, but never, ever dull.