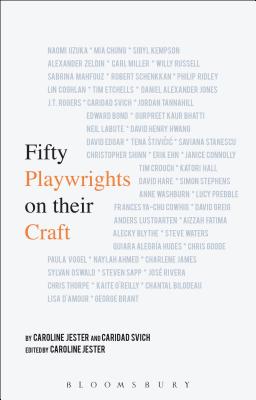 Fifty Playwrights on Their Craft

In a series of interviews with fifty playwrights from the US and UK, this book offers a fascinating study of the voices, thoughts, and opinions of today's most important dramatists.

Filled with probing questions, Fifty Playwrights on their Craft explores ideas such as how does playwriting help a global dialogue; where do dramatists find the ideas that become the stories and narratives within their plays; how can the stage inform the writer's creative process; how does crossing boundaries between art forms push the living art form of theatre-making forward; and will there be playwrights in another 50 years? Through these interrogating interviews we come to understand how and why playwrights write what they do and gain insight into their processes and motivations. Together, the interviews provide an inter-generational dialogue between dramatists whose work spans over six decades. Featuring interviews with playwrights such as Edward Bond, Katori Hall, Chris Goode, David Greig, Willy Russell, David Henry Hwang, Alecky Blythe, Anne Washburn and Simon Stephens, Jester and Svich offer an unprecedented view into the multiple perspectives and approaches of key playwrights on both sides of the Atlantic.

Caroline Jester is a writer and dramaturg. She is a Fellow of the Institute of Creative and Critical Writing at Birmingham City University, UK, a Master on the MA in Dramatic Writing at Central Saint Martins, UK and has been Literary Manager and Dramaturg at the Birmingham Repertory Theatre, UK. Jester's publications include Europa (2013), Dramatic Writing Masterclasses: Key Advice from the Industry Masters (2017) and Playwriting Across the Curriculum (2011). Caridad Svich is a playwright, associate editor of Contemporary Theatre Review and founder of NoPassport theatre alliance and press. She received a 2012 OBIE Award for Lifetime Achievement and the 2011 American Theatre Critics Association Primus Prize for The House of the Spirits.She has edited several books on theatre including Audience Revolution and Innovation in Five Acts (2016 & 2015), Out of Silence: Censorship in Theatre & Performance (2014), and Trans-Global Readings (2004).
Loading...
or
Not Currently Available for Direct Purchase