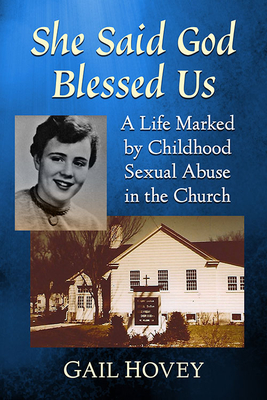 She Said God Blessed Us

A Life Marked by Childhood Sexual Abuse in the Church

When Gail Hovey was a teenager, her local Presbyterian church hired Georgia, a seminary-trained Christian education director. Brilliant and charismatic, Georgia used the language of faith to seduce several of her students, swearing each to secrecy. When she eventually abandoned the others and focused on Gail, Gail believed herself uniquely blessed and for the next 15 years modeled her life on Georgia's--the seminary degree, the minister husband. The relationship had a profound and lasting influence on the woman Gail became and left her a legacy of guilt and shame. Shedding light on the largely invisible issue of sexual abuse of girls by women, Hovey's brave memoir relates her decades-long journey--from East Harlem to South Africa to Brooklyn--to break free of an overwhelmingly powerful and deeply destructive first love.

Gail Hovey is an editor and writer. Her activism began with the civil rights movement and grew to include economic and social justice work with people's movements from southern Africa to Hawaii. She lives in New York's Lower Hudson Valley.
Loading...
or support indie stores by buying on