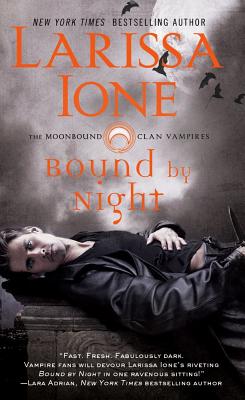 The first installment in a sexy new paranormal romance series by Larissa Ione, author of the bestselling Demonica series!

Nicole Martin was only eight years old when she narrowly survived a massacre: her family’s vampire slaves rebelled and killed everyone in her household. Twenty years later, Nicole now dedicates herself to finding a vaccine against vampirism…and eradicating the gruesome memories that give her nightmares.

Riker, a member of the wild vampire Moon Clan, is haunted by his own demons—his wife Lorraine had been captured and enslaved by the Martin family. It was during a botched escape attempt that she was killed, along with their unborn child. Still wracked with grief and anger, Riker is now fueled solely by the desire to rescue vampire slaves…and slaughter their owners.

When Riker stumbles upon Nicole in a chance meeting, he immediately recognizes her as a member of the Martin family that once enslaved his wife—and she recognizes him as the wild vampire she saw kissing a pregnant slave in the moments before her violent death—an image that has haunted her dreams for years.

When Riker kidnaps Nicole and they spend a night together in a cave on the way back to his clan, suddenly they begin to realize that they aren’t as different from one another as they may have thought—and they’re finding themselves drawn to one another…