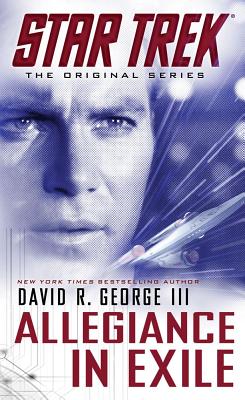 The Original Series: Allegiance in Exile

Captain James T. Kirk embarks on a mission that he may soon regret in this all-new Original Series adventure from the New York Times bestselling author.

A beautiful green world, rich in fertile soil and temperate climate . . . a textbook Class-M planet that should be teeming with life. Scans show no life-signs, but there are refined metals, including those associated with a space-faring race . . . and a lone city. But where are all of the inhabitants? Captain James T. Kirk leads a landing party from the U.S.S. Enterprise, hoping to get some answers.

The away team discovers a city in ruins, covered by dust, utterly bereft of life. Tricorder readings indicate that this is no ancient metropolis—it has been deserted only for a year. And just beyond the citadel lies what appears to be an ancient spaceport . . . a graveyard of ships that have clearly been sabotaged.

With these ruins too far from either the Klingon or the Romulan Empires, the Enterprise crew can only wonder: Who could have done this? And could this unnamed threat now pose an imminent danger to the Federation?