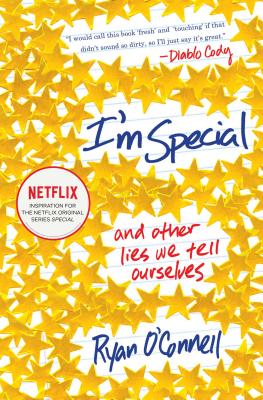 And Other Lies We Tell Ourselves

From the beloved blogger turned voice of an online generation, an unforgettable and hilarious memoir-meets-manifesto exploring what it means to be a millennial gay man living with cerebral palsy, which VICE calls “a younger, gay version of Mary Karr's Lit.”

People are obsessed with Ryan O’Connell’s blogs. With tens of thousands reading his pieces on Thought Catalog and Vice, watching his videos on YouTube, and hanging on to each and every #dark tweet, Ryan has established himself as a unique young voice who’s not afraid to dole out some real talk. He’s that candid, snarky friend you consult when you fear you’re spending too much time falling down virtual k-holes stalking your ex on Facebook or when you’ve made the all-too-common mistake of befriending a psycho while wasted at last night’s party and need to find a way to get rid of them the next morning. But Ryan didn’t always have the answers to these modern-day dilemmas. Growing up gay and disabled with cerebral palsy, he constantly felt like he was one step behind everybody else. Then the rude curveball known as your twenties happened and things got even more confusing.

Ryan spent years as a Millennial cliché: he had dead-end internships; dabbled in unemployment; worked in his pajamas as a blogger; communicated mostly via text; looked for love online; spent hundreds on “necessary” items, like candles, while claiming to have no money; and even descended into aimless pill-popping. But through extensive trial and error, Ryan eventually figured out how to take his life from bleak to chic and began limping towards adulthood.

Sharp and entertaining, I’m Special will educate twentysomethings (or other adolescents-at-heart) on what NOT to do if they ever want to become happy fully functioning grown-ups with a 401k and a dog.

Praise For I'm Special: And Other Lies We Tell Ourselves…

“Like a younger, gay version of Mary Karr's Lit, [I’m Special] earnestly details the complexities of [having cerebral palsy] while also making the kind of hilarious politically incorrect jokes you rarely hear thanks to today's outrage culture. Most importantly, O'Connell knows how to tell a story. … Like the best personal essayists, [O’Connell] possesses the rare talent of making the most obscure personal event relatable to any reader, and he writes like he talks.”
— Vice

“A special and hilarious star in a sea of same-y Millennial memoirists. I would call this book ‘fresh’ and ‘touching’ if that didn’t sound so dirty, so I’ll just say it’s great.”
— Diablo Cody, screenwriter


“O’Connell amassed a following for candidly blogging about his life on the Internet. Now he brings his sharp wit to a memoir about growing up gay and with cerebral palsy.”

“Ryan O’Connell is so funny that you might not notice that he’s a seriously good writer. His tales of twentysomething traumas—ranging from concealing a serious disability to surviving in a world of cutthroat internships and internet bitchiness—are made special (really) by his one of a kind voice.”
— Emily Gould, author of Friendship

“Ryan O’Connell has written a book that’s fun, funny, biting, confessional and necessary. It’s like the Bible, but gay. Well, gayer.”
— Megan Amram, author of Science . . . for Her!

“Wonderful… O’Connell’s life lessons are valuable, and his tone — which is as smart as it is smartass — is what distinguishes I’m Special.”
— Philadelphia Gay News

“Hilarious.… I’m Special is delightfully fun and… easy to read in one fell swoop.”
— Advocate.com

“This book is completely unique and painfully universal. Identifying yourself in Ryan O'Connell's writing is to understand that you may not be special, but you are human.”
— Jake Shears, lead singer of Scissor Sisters

“O’Connell finds humor in the very ordinary experiences of his generation.”
— Newsday

“Deeply revealing in the most casual manner.”
— Salon

Ryan O’Connell is the Emmy-nominated creator, writer, and star of Netflix’s Special, which is based on his memoir, I’m Special: And Other Lies We Tell Ourselves. He’s also written for other TV shows like Will & Grace, Awkward, and Peacock’s Queer as Folk revival, which he also stars in. He lives, laughs, and loves in Los Angeles with his partner, Jonathan Parks-Ramage.
Loading...
or support indie stores by buying on