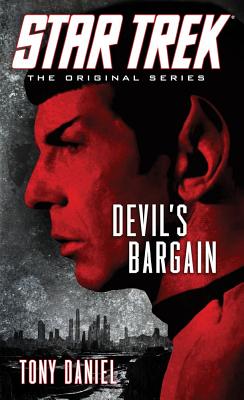 An all-new Original Series adventure about a Federation mining colony on the verge of destruction and the unlikely solution that could save them from extinction.

Captain James T. Kirk and the crew of the U.S.S. Enterprise are sent to evacuate the Omega sector frontier colony Vesbius—a pioneer settlement that is on the brink of an extinction-level event threatening not only all of the colonists, but biological products that are vital to Starfleet. However, rescue efforts are being thwarted by the colonists themselves, who refuse to abandon Vesbius, claiming that their lives depend upon staying, while giving no reason why. It is after these irrational decisions that First Officer Spock makes a radical suggestion: Perhaps an unexpected ally could aid the colony and help complete the mission. . . .

Tony Daniel is a science fiction writer and author of Star Trek: The Original Series: Devil’s Bargain, Guardian of Night, Metaplanetary, Superluminal, Earthling, Warpath, and short stories such as “A Dry, Quiet War.” With David Drake, he is the author of The Heretic and The Savior. He is also an editor at Baen Books. He’s had multiple stories in Year’s Best anthologies, one of which, “Life on the Moon,” won the Asimov’s Reader’s Poll Award for year’s best story and was nominated for a Hugo Award.
Loading...
or
Not Currently Available for Direct Purchase