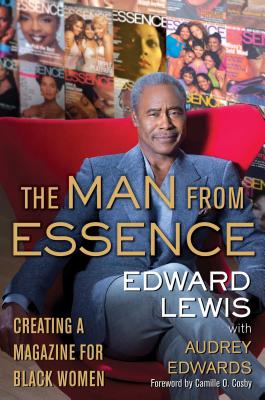 The Man from Essence

Creating a Magazine for Black Women

Essence magazine is the most popular, well respected, and largest circulated black women’s magazine in history. Largely unknown is the remarkable story of what it took to earn that distinction.

The Man from Essence depicts with candor and insight how Edward Lewis, CEO and publisher of Essence, started a magazine with three black men who would transform the lives of millions of black American women and alter the American marketplace. Throughout Essence’s colorful and storied history, Ed Lewis remained the cool and constant presence, a quiet-talking corporate captain and business strategist who prevailed against the odds and the naysayers. He would emerge to become the last man standing—the only partner to survive the battles that raged before the magazine was sold to Time, Inc. in the largest buyout of a black-owned publication by the world’s largest publishing company.

By the time Lewis did the deal with Time, a little magazine that limped from the starting gate in 1970 with a national circulation of 50,000 had grown into a powerhouse with a circulation of more than a million and a pass along readership of eight million.

The story of Essence is ultimately the story of American business, black style. From constant battles with a racist advertising community to hostile takeover attempts, warring partners packing heat, mass firings, and mass defections—all of which revealed inherent challenges in running a black business—the saga is as riveting as any thriller steeped in high drama, hijinks, and juicy dishing.

In this engaging business memoir, Ed Lewis tells the inspiring story of how his own rise from humble South Bronx beginnings to media titan was shaped by the black women and men in his life. This in turn helped shape a magazine that has changed the face of American media.

Praise For The Man from Essence: Creating a Magazine for Black Women…

“Who knew that Essence, a magazine that has celebrated the stories of millions of black women for more than 40 years, has its own juicy story to tell? Bravo to Ed Lewis, cofounder, CEO, and publisher of Essence, for telling it with guts and honesty.”
— Bill Cosby

“Ed Lewis tells it like it is in The Man from Essence, a great romp about the amazing years in the life of a cultural touchstone, Essence magazine. He delivers a juicy story that captures the euphoria of the hard work required to win against the odds and be the "last man standing." Bravo!”
— Benilde Little, author of Good Hair

“Ed Lewis invites us on the journey of a lifetime, and shows us how persistence, resilience and plain old-fashioned grit are still the keys to achieving the American Dream.”
— Richard D. Parsons

Edward Lewis, propelled by the extraordinary success of Essence magazine, has become one of the most successful and respected magazine publishers in the country. In 1969, he cofounded Essence and later founded Latina magazine. Mr. Lewis was honored with the Henry Johnson Fisher Lifetime Achievement Award, the Time, Inc. Henry Luce Award, and was a 2014 inductee into the Advertising Hall of Fame by the American Advertising Federation. He is the former chairman of the Magazine Publishers of America and currently serves as Senior Advisor for Solera Capital, a New York–based private equity firm.

Audrey Edwards, coauthor of Children of the Dream: The Psychology of Black Success, is a veteran award-winning journalist and editor. She has served as executive editor and editor at Essence magazine. She has held the executive editor position at Black Enterprise magazine and senior editor positions at Family Circle and More magazines. In addition, she has written for numerous magazines, including the New York Times Sunday Magazine, O, The Oprah Magazine, Glamour, Seventeen, and the Columbia Journalism Review. She has also written for the online publications TheRoot.com and Salon.com.

Camille Cosby is a producer and educator. She coproduced the Tony Award-nominated Having Our Say, which won a 1999 Peabody Award for television, and has also served as executive producer of numerous film projects.