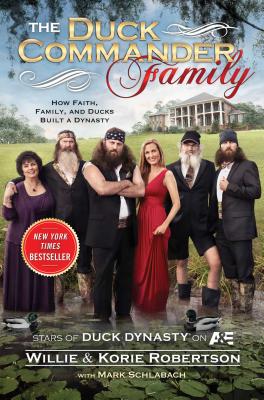 How Faith, Family, and Ducks Built a Dynasty

Meet the Robertsons in this personal behind-the-scenes look at the stars of the exploding A&E® show Duck Dynasty®.

This book gives readers an up-close and personal, behind-the-scenes look at the family in the exploding A&E® show—Duck Dynasty®. This Louisiana bayou family operates Duck Commander, a booming family business that has made them millions. You’ll hear all about the Robertson clan from Willie and what it was like growing up in the Robertson household. You’ll sample some of Willie’s favorite family recipes from Phil, Kay, and even some of his own concoctions; and you’ll get to know the beautiful Robertson women. You’ll hear from Korie about the joys and hardships of raising a family, running a business, and wrangling the Robertson men while staying fashionable and beautiful inside and out. Discover more about the family dynamics between brothers Willie, Jase, Jep, and parents Phil and Kay. You’ll even meet a fourth brother who isn’t in the show.

The popularity of Duck Dynasty is skyrocketing, garnering a Wednesday-night top two finish in all of cable.

Willie Robertson stars in A&E®’s hit show Duck Dynasty® and is the CEO of Duck Commander, a family operated business that creates products for duck hunters including duck calls, clothes, and videos. Willie, along with his wife and business partner Korie Robertson, also owns and operates Buck Commander where they create products for deer hunters. Willie took the family duck call making company from a living room operation to a multi-million dollar business. Willie lives with his wife, Korie, and their four children, John Luke, Sadie, Will, and Bella, in West Monroe, Louisiana.

Mark Schlabach is the coauthor of the New York Times bestselling books, Happy, Happy, Happy, Si-cology 1, and The Duck Commander Family. He is one of the most respected and popular college football columnists in the country. He and his wife live in Madison, Georgia, with their three children.
Loading...
or
Not Currently Available for Direct Purchase