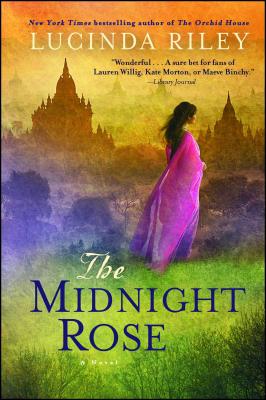 From the #1 international bestselling author of The Orchid House—an epic saga of two remarkable women and two love stories spanning the years from 1920s India to modern-day England.

Spanning four generations, The Midnight Rose sweeps from the glittering palaces of the great maharajas of India to the majestic stately homes of England, following the extraordinary life of a remarkable girl, Anahita Chaval, from 1911 to the present day . . .

In the heyday of the British Raj, eleven-year-old Anahita, from a noble but impov­erished family, forms a lifelong friendship with the headstrong Princess Indira, the privileged daughter of Indian royalty. As the princess’s official companion, Anahita accompanies her friend to England just before the outbreak of WorldWar I. There, she meets young Donald Astbury—reluctant heir to the magnifi­cent, remote Astbury Estate—and his scheming mother.

Ninety years later, Rebecca Bradley, a young American film star, has the world at her feet. But when her turbulent relationship with her equally famous boyfriend takes an unexpected turn, she’s relieved that her latest role, playing a 1920s debutante, will take her away from the glare of publicity to a distant cor­ner of the English countryside. Shortly after filming begins at the now-crumbling Astbury Hall, Ari Malik, Anahita’s great-grandson, arrives unexpectedly, on a quest for his family’s past. What he and Rebecca discover begins to unravel the dark secrets that haunt the Astbury dynasty . . .

A multilayered, heartbreaking tale filled with unforgettable characters caught in the sweep of history, The Midnight Rose is Lucinda Riley at her most captivating and unforgettable.

Praise For The Midnight Rose: A Novel…

"A bit of a ghost story, a little romance, some historical fiction, and plenty of family drama mix into one wonderful story... A sure bet for fans of Lauren Willig, Kate Morton, or Maeve Binchy."
— Library Journal

"An extraordinary story, a complex, deeply engaging tale filled with fascinating characters whose slowly revealed secrets carry readers to the very end. Spanning four generations and moving from the great palaces of India to the stately country home of an English lord, this is a sweeping tale of love lost and found."
— Booklist

Lucinda Riley was the New York Times bestselling author of over twenty novels, including The Orchid House, The Girl on the Cliff, and the Seven Sisters series. Her books have sold twenty million copies in thirty-five languages globally. She was born in Ireland and divided her time between England and West Cork with her husband and four children. Visit her website at LucindaRiley.com.
Loading...
or support indie stores by buying on