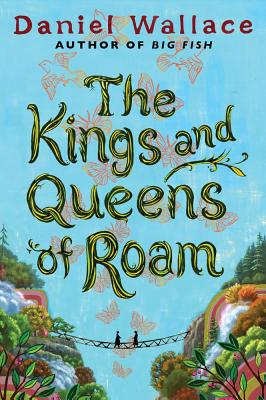 The Kings and Queens of Roam

“Darkly funny and wildly inventive . . . There’s a wealth of enchantment here—curses, an evil sister, a miraculous spring, teetotaling ghosts, and, most importantly, the transformative magic of loss."
— The Atlanta Journal-Constitution

“Masterful . . . Wallace gives nothing short of a bravura performance in the art of storytelling. . . . Balances the primary goal of storytelling with the underlying one of providing inspiration and insight, and he achieves both aims spectacularly. . . . [A] complex and gratifying yarn.”
— Indy Week

"A tall-tale jaunt . . . A whimsical, tender tale about friendship, trust and the price of second chances."
— BookPage

“Reading The Kings and Queens of Roam is like living, for a few hundred pages, in another world: beautiful, epic, tragic, and ultimately redemptive. In Roam Daniel Wallace has created his own Macondo. This is his best novel yet.”
— Wesley Stace, author of Charles Jessold, Considered as a Murderer

Daniel Wallace is the author of five novels. His first, Big Fish, was made into a motion picture of the same name by Tim Burton in 2003, and a musical version on Broadway in 2013. He is a contributing editor to Garden & Gun magazine and is the J. Ross MacDonald Distinguished Professor of English at the University of North Carolina, Chapel Hill, where he teaches and directs the Creative Writing Program. Visit his website at DanielWallace.org.
Loading...
or
Not Currently Available for Direct Purchase