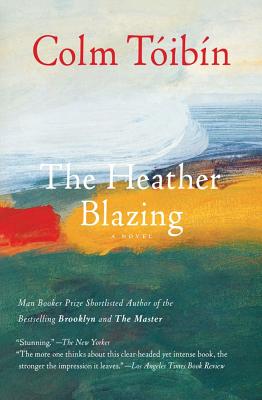 Colm Tóibín’s second “lovely, understated” novel that “proceeds with stately grace” (The Washington Post Book World) about an uncompromising judge whose principles, when brought home to his own family, are tragic.

Eamon Redmond is a judge in Ireland’s high court, a completely legal creature who is just beginning to discover how painfully unconnected he is from other human beings. With effortless fluency, Colm Tóibín reconstructs the history of Eamon’s relationships—with his father, his first “girl,” his wife, and the children who barely know him—and he writes about Eamon’s affection for the Irish coast with such painterly skill that the land itself becomes a character. The result is a novel of stunning power, “seductive and absorbing” (USA Today).

Praise For The Heather Blazing: A Novel…

“[A] stunning Irish novel, which seems to derive its clear and affecting style in part from the staunch personality of its protagonist…and in part from the chilly beauty of the south-east coast of Ireland.”—The New Yorker

“The more one thinks about this clear-headed yet intense book, the stronger the impression it leaves.”—Los Angeles Times Book Review

“The Heather Blazing makes a breathtaking leap into the realm of Joyce’s Dubliners.”—Mirabella

“There are…a handful of writers who manage to combine our time’s awareness of the boot tracks families leave on their members’ psyches with a direct and uncomplicated experience of those wounded lives. They are masters, and there are precious few of them…To nominate someone for that august company, Colm Tóibín seems an unavoidable candidate.”—Geoffrey Stokes, The Boston Globe

“Beautifully written…Tóibín weaves past and present together in a way designed to extract maximum resonance…One of the book’s surprises is its subtle humor, its awareness of small ironies.”—Voice Literary Supplement

“The novel is narrated dispassionately and with deceptive simplicity, moving between the public figure of the judge in his study and the terrible deaths of childhood…It is impossible to read Tóibín without being moved, touched and finally changed.”—Linda Grant, Independent on Sunday

“The quiet but relentless force of Tóibín’s prose, its honed honesty and extraordinary shading of color and mood, animates his stories…There are breathtaking moments, episodes of glassing clarity and trueness to the deepest chords of emotional and spiritual life.”—Vince Passaro, New York Newsday

Colm Tóibín is the author of nine novels, including The Blackwater Lightship; The Master, winner of the Los Angeles Times Book Prize; Brooklyn, winner of the Costa Book Award; The Testament of Mary; and Nora Webster, as well as two story collections, and Mad, Bad, Dangerous to Know, a look at three nineteenth-century Irish authors. He is the Irene and Sidney B. Silverman Professor of the Humanities at Columbia University. Three times shortlisted for the Man Booker Prize, Tóibín lives in Dublin and New York.
or support indie stores by buying on