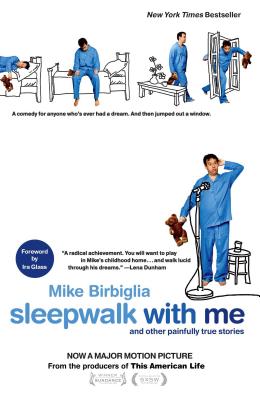 Comedian Mike Birbiglia’s hilarious New York Times bestseller is now a major motion picture co-written and produced by Ira Glass (This American Life) that IFC Films will release in theaters and through Video on Demand in August—starring Birbiglia and Emmy-nominated actress Lauren Ambrose (Six Feet Under).

Sleepwalk with Me is a comedic memoir, but I’m only thirty-two years old, so I’d hate for you to think I’m “wrapping it up,” so to speak. But I tell some really personal stories. Stories that I considered not publishing time and time again—about my childhood, about girls I made out with when I was thirteen, about my parents, and, of course, about my bouts with sleepwalking. Bring this book to bed. And sleepwalk with me.

Mike Birbiglia is a comedian, author, actor, and director. His one person shows Sleepwalk with Me and My Girlfriend’s Boyfriend have both run successfully off-Broadway and toured internationally. He was a finalist for the Thurber Prize for American Humor for this book and his feature film adaptation of it won the NEXT category’s audience award at Sundance Film Festival in 2012.
Loading...
or
Not Currently Available for Direct Purchase