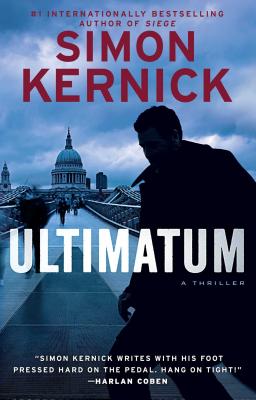 #1 bestselling author Simon Kernick will leave you breathless with his sheer storytelling power in this race-against-time thriller about a terrorist threat in London.

An explosion blasts through a cafe in Central London. Minutes later, a call from an unknown terror group warns that a far greater attack will be launched in twelve hours’ time.

William Garrett, nicknamed “Fox,” is awaiting trial for mass murder. He claims he can name the bombers—but only at a price.

As shocking revelations are unveiled, you’ll be racing to the last page as fast as the characters in Ultimatum. As #1 New York Times bestselling author Harlan Coben says, “Simon Kernick writes with his foot pressed hard on the pedal. Hang on tight!”

Praise For Ultimatum: A Thriller…

“Nonstop action…. A strong cast of supporting characters supplies a continuing stream of engaging subplots that play out within the larger takeover story. Kernick keeps all the balls in the air as he delivers an exciting performance.”

"A fast-moving yarn with short chapters, tight writing, plenty of violence, and characters both flawed and believable... Kernick is a first-rate storyteller."

"Simon Kernick writes with his foot pressed hard on the pedal. Hang on Tight!"
— Harlan Coben

Simon Kernick is a Sunday Times #1 bestselling author and one of the UK’s foremost thriller writers. His twelve novels have been translated into more than twenty languages and have sold more than four million copies worldwide. He lives in London.
Loading...
or support indie stores by buying on