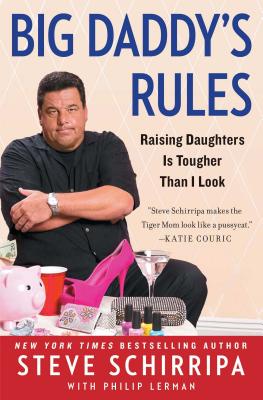 Raising Daughters Is Tougher Than I Look

From world-famous tough guy and New York Times bestselling author Steve Schirripa—a winning mix of wisecracks and wise words on the hardest job of all: being a father.

What happens when a world-famous tough guy takes on the toughest job of all— becoming a father?

Welcome to the world of the Big Daddy.

Steve Schirripa is known for his star turns on The Sopranos and The Secret Life of the American Teenager, but in his own life he’s the father of two daughters of his own—and a self-confessed human volcano. In Big Daddy’s Rules, Schirripa tells all and brings a welcome dose of old-school advice (and new-school humor) to the parenting wars. “You’re not there to be a friend,” Schirripa says bluntly. “You’re there to be a dad.”

Schirripa serves up the heartwarming and hilarious stories of how he and his wife navigated the wild waters of parenthood: from the moment the tough guy’s heart melted when he held his first-born in his arms to what he felt (and did) the time he caught someone looking at his teenage daughter’s butt.

He lays out all the rules for being a Big Daddy— someone who is strong, devoted, and always looking out for his kids’ best interests, even when that means not being the coolest dad on the block. Overprotective? Maybe. Willing to tone it down? Absolutely not. Big Daddy’s Rules is filled with tales of his over-the-top yet heartfelt parenting style—confronting bad teachers, staring down boyfriends, and explaining just how crazy you’re allowed to get if you catch your kid drinking (hint: really, really crazy).

With a mixture of street-smart bravado and selfeffacing humor, Schirripa pulls no punches as he delivers his no-bull stance on what it takes to raise kids today. He’s uproariously funny, but Schirripa isn’t just cracking jokes here; this is also a call to action for dads to return to common-sense parenting and reclaim their role as protector and holder of values to be passed down.

Praise For Big Daddy's Rules: Raising Daughters Is Tougher Than I Look…

“If you read one hilarious book about parenting make it Schirripa’s – or he will come down on you like a ton of… don’t you walk away from me mister… get back… oh f**k it, just read the book.”
— Jon Stewart

“Steve Schirripa's book “Big Daddy’s Rules” is wonderful and might help lots of parents be brave enough to put their foot down. This book is funny and insightful and I loved it.”
— Whoopie Goldberg

“I read the book like we agreed, Steve. Have to admit it's funny, insightful and unique. Now keep your end of the bargain. Come over my house and yell at my kids. Please.”
— Ray Romano

“I’m not endorsing this great book by Steve Schirripa, about being the father of two daughters, because I was intimidated. Well, not completely. OK, mostly.”
— Jim Gaffigan

“There aren't many men who can be smart, tough, tender, witty and insightful all in perfect measure, and who can also write so well. That would define the inimitable Mr. Steve Schirripa!”
— Richard Belzer

“Listen, I know Steve. Steve is actually crazy. But his kids are nicer than almost any adult I know. So I thought, maybe it’s a good crazy. Then I read this book. No, he’s actually just crazy. But he figured out how to make crazy work for him and his kids. Which is more than I can say for the rest of us.”
— Joe Rogan

Steve Schirripa was a breakout star on The Sopranos. He is the New York Times bestselling author of A Goomba’s Guide to Life and currently stars on The Secret Life of the American Teenager. Schirripa also hosts Investigation Discovery’s Karma’s a Bitch! Schirripa lives in New York with his wife and two daughters.

Philip Lerman is the author of Dadditude: How a Real Man Became a Real Dad and the coauthor of several books, including No Mercy. Lerman is the former co-executive producer of America’s Most Wanted and former national editor of USA TODAY.
Loading...
or support indie stores by buying on