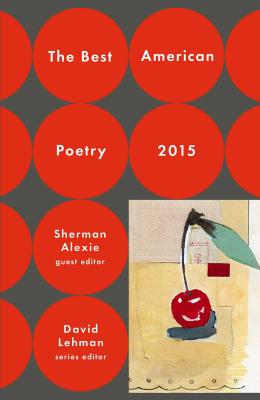 The premier anthology of contemporary American poetry continues with an exceptional volume edited by award-winning novelist and poet Sherman Alexie, now with a new essay by Alexie on reactions to the 2015 publication.

Since its debut in 1988, The Best American Poetry has become a mainstay for the direction and spirit of American poetry. Each volume in the series presents the year’s most extraordinary new poems and writers. Guest editor Sherman Alexie’s picks for The Best American Poetry 2015 highlight the depth and breadth of the American experience. Culled from electronic and print journals, the poems showcase some of our leading luminaries—Amy Gerstler, Terrance Hayes, Ron Padgett, Jane Hirshfield—and introduce a number of outstanding younger poets taking their place in the limelight.

A leading figure since his breakout poetry collection The Business of Fancydancing in 1992, Sherman Alexie won the National Book Award for his novel The Absolutely True Diary of a Part-Time Indian. He describes himself as “lucky enough to be a full-time writer” and has written short stories, novels, screenplays, and essays—but he is at his core a poet. As always, series editor David Lehman’s foreword assessing the state of the art kicks off the book, followed by an introductory essay in which Alexie discusses his selections. The Best American Poetry 2015 is a guide to who’s who and what’s happening in American poetry today.

"A 'best' anthology that really lives up to its title."
-- Chicago Tribune

"Each year, a vivid snapshot of what a distinguished poet finds exciting, fresh and memorable: and over the years, as good a comprehensive overview of contem-porary poetry as there can be."
-- Robert Pinsky

Sherman Alexie, winner of the PEN/Faulkner Award for Fiction, the PEN/Malamud Award for Short Fiction, a PEN/Hemingway Citation for Best First Fiction, and the National Book Award for Young People's Literature, is a poet, short story writer, novelist, and performer. His twenty-four books include What I've Stolen, What I've Earned, poetry, Blasphemy: New and Selected Stories, and The Absolutely True Diary of a Part-Time Indian, a novel. Alexie has been an urban Indian since 1994 and lives in Seattle with his family.
Loading...
or
Not Currently Available for Direct Purchase