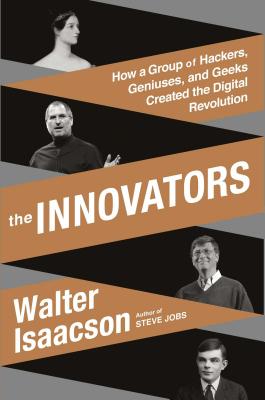 How a Group of Hackers, Geniuses, and Geeks Created the Digital Revolution

Following his blockbuster biography of Steve Jobs, The Innovators is Walter Isaacson’s revealing story of the people who created the computer and the Internet. It is destined to be the standard history of the digital revolution and an indispensable guide to how innovation really happens.

What were the talents that allowed certain inventors and entrepreneurs to turn their visionary ideas into disruptive realities? What led to their creative leaps? Why did some succeed and others fail?

This is the story of how their minds worked and what made them so inventive. It’s also a narrative of how their ability to collaborate and master the art of teamwork made them even more creative.

For an era that seeks to foster innovation, creativity, and teamwork, The Innovators shows how they happen.

Praise For The Innovators: How a Group of Hackers, Geniuses, and Geeks Created the Digital Revolution…

“[A] sweeping and surprisingly tenderhearted history of the digital age . . . absorbing and valuable, and Isaacson’s outsize narrative talents are on full display. Few authors are more adept at translating technical jargon into graceful prose, or at illustrating how hubris and greed can cause geniuses to lose their way. . . . The book evinces a genuine affection for its subjects that makes it tough to resist . . . his book is thus most memorable not for its intricate accounts of astounding breakthroughs and the business dramas that followed, but rather for the quieter moments in which we realize that most primal drive for innovators is a need to feel childlike joy.”
— New York Times Book Review

“The Innovators . . . is riveting, propulsive and at times deeply moving. . . . One of Isaacson’s jealousy-provoking gifts is his ability to translate complicated science into English—those who have read his biographies of Einstein and Steve Jobs understand that Isaacson is a kind of walking Rosetta Stone of physics and computer programming. . . . The Innovators is one of the most organically optimistic books I think I've ever read. It is a stirring reminder of what Americans are capable of doing when they think big, risk failure, and work together.”

“A sprawling companion to his best-selling Steve Jobs . . . this kaleidoscopic narrative serves to explain the stepwise development of 10 core innovations of the digital age — from mathematical logic to transistors, video games and the Web — as well as to illustrate the exemplary traits of their makers. . . . Isaacson unequivocally demonstrates the power of collaborative labor and the interplay between companies and their broader ecosystems. . . . The Innovators is the most accessible and comprehensive history of its kind.
— The Washington Post

“Walter Isaacson has written an inspiring book about genius, this time explaining how creativity and success come from collaboration. The Innovators is a fascinating history of the digital revolution, including the critical but often forgotten role women played from the beginning. It offers truly valuable lessons in how to work together to achieve great results.”
— Sheryl Sandberg

“Isaacson provides a sweeping and scintillating narrative of the inventors, engineers and entrepreneurs who have given the world computers and the Internet. . . . a near-perfect marriage of author and subject . . . an informative and accessible account of the translation of computers, programming, transistors, micro-processors, the Internet, software, PCs, the World Wide Web and search engines from idea into reality. . . . [a] masterful book.”
— San Francisco Chronicle

“A panoramic history of technological revolution . . . a sweeping, thrilling tale. . . . Throughout his action-packed story, Isaacson . . . offers vivid portraits—many based on firsthand interviews—[and] weaves prodigious research and deftly crafted anecdotes into a vigorous, gripping narrative about the visionaries whose imaginations and zeal continue to transform our lives.”
— Kirkus Reviews, starred review

“A remarkable overview of the history of computers from the man who brought us biographies of Steve Jobs, Benjamin Franklin, Albert Einstein, and Henry Kissinger . . . Isaacson manages to bring together the entire universe of computing, from the first digitized loom to the web, presented in a very accessible manner that often reads like a thriller.”
— Booklist (starred review)

“Anyone who uses a computer in any of its contemporary shapes or who has an interest in modern history will enjoy this book.”
— Library Journal (starred review)

“The history of the computer as told through this fascinating book is not the story of great leaps forward but rather one of halting progress. Journalist and Aspen Institute CEO Isaacson (Steve Jobs) presents an episodic survey of advances in computing and the people who made them, from 19th-century digital prophet Ada Lovelace to Google founders Larry Page and Sergey Brin. . . . Isaacson’s absorbing study shows that technological progress is a team sport, and that there’s no I in computer.”
— Publishers Weekly

“Isaacson succeeds in telling an accessible tale tailored to a general interest audience. He avoids the overhyped quicksand that swallows many technology writers as they miscast tiny incremental advances as ‘revolutionary.’ Instead Isaacson focuses on the evolutionary nature of progress. The Innovators succeeds in large part because Isaacson repeatedly shows how these visionaries, through design or dumb luck, were able to build and improve on the accomplishments of previous generations.”
— Miami Herald

“. . . sharing their joy, [Isaacson] captures the primal satisfaction of solving problems together and changing the world. . . . In a way, the book is about the complex lines of force and influence in male friendships, the egging each other on and ranking each other out.”
— Bloomberg Business Week

“[Isaacson’s] careful, well-organized book, written in lucid prose accessible to even the most science-challenged, is well worth reading for its capable survey of the myriad strands that intertwined to form the brave new, ultra-connected world we live in today.”
— TheDailyBeast.com

“If you think you know everything about computers, read The Innovators. Surprises await on every page.”
— Houston Chronicle

“The Innovators . . . does far more than analyze the hardware and software that gave birth to digital revolution – it fully explores the women and men who created the ideas that birthed the gadgets. . . . Isaacson tells stories of vanity and idealism, of greed and sacrifice, and of the kind of profound complexity that lies behind the development of seemingly simple technological improvements. . . . Isaacson is skilled at untangling the tangled strands of memory and documentation and then reweaving them into a coherent tapestry that illustrates how something as complicated and important as the microchip emerged from a series of innovations piggybacking off of one another for decades (centuries, ultimately.) . . . It’s a portrait both of a technology, and the culture that nurtured it. That makes it a remarkable book, and an example for other would-be gadget chroniclers to keep readily at hand before getting lost in a labyrinth of ones and zeros – at the expense of the human beings who built the maze in the first place.”
— Christian Science Monitor

"[A] tour d’horizon of the computer age . . . [The Innovators] presents a deeply comforting, humanistic vision: of how a succession of brilliant individuals, often working together in mutually supportive groups, built on each others’ ideas to create a pervasive digital culture in which man and machine live together in amicable symbiosis. . . . a fresh perspective on the birth of the information age."
— Financial Times

“A sweeping history of the digital revolution, and the curious partnerships and pulsing rivalries that inhabit it.”
— Gizmodo.com

“Steve Jobs’s biographer delivers a fascinating, informative look at the quirky ‘collaborative creatures’ who invented the computer and Internet.”
— People

“[T]his is the defining story of our era, and it’s here told lucidly, thrillingly and—because the bright ideas generally occur to human beings with the quirks, flaws and foibles that accompany overdeveloped intellect—above all, amusingly.”
— The Guardian

“If anyone in America understands genius, it’s Walter Isaacson.”
— Salon.com

“Mr. Isaacson's fine new book, The Innovators, is a serial biography of the large number of ingenious scientists and engineers who, you might say, led up to Jobs and his Apple co-founder Steve Wozniak.”
— Steven Shapin

“…a project whose gestation preceded Steve Jobs and whose vision exceeds it.”
— New York Magazine

“For a book about programmers and algorithms, ‘The Innovators’ is a lively, enthusiastically written tale and a worthwhile read, not only for tech-heads but for anyone interested in how computers got into our pockets and how innovation works.”
— Aspen Times

“The brilliant Isaacson follows his mega-selling 2011 biography of Apple founder Steve Jobs with this detailed account of the legendary and unsung people who invented the computer and then the Internet.”
— Sacramento Bee

“The argument against the great man theory of invention is not new. But the main merit of Walter Isaacson’s The Innovators is to show that this is particularly true in information technology—despite the customary lionisation of many of its pioneers, from Babbage and Alan Turing to Bill Gates and Linus Torvalds. . . . Mr Isaacson excels at explaining complex concepts.”
— The Economist

“Walter Isaacson is the best possible guide to this storm. He interrupted work on [The Innovators] book to write the standard biography of Steve Jobs, having previously written lives of Einstein, Benjamin Franklin and Kissinger. His approach involves massive research combined with straight, unadorned prose and a matter-of-fact storytelling style. . . . the directness of his approach makes for clarity and pace.”
— Bryan Appleyard

“Isaacson’s book offers a magisterial, detailed sweep, from the invention of the steam engine to the high-tech marvels of today, with profiles of the great innovators who made it all happen. Among the book’s excellent advice is this gem from computing pioneer Howard Aiken: ‘Don’t worry about people stealing an idea. If it’s original, you will have to ram it down their throats.’”
— Forbes

“In The Innovators, Isaacson succeeds infilling our knowledge gap by crafting a richly detailed history that traces the evolution of these modern tools and pays homage to the people whose names and contributions to computer science are little-known to most of us. . . . The Innovators is as much about the essence of creativity and genius as it is about cathode tubes, binary programs, circuit boards, microchips and everything in between.”
— SUCCESS

“A sweeping history of the digital revolution, and the curious partnerships and pulsing rivalries that inhabit it.”
— Gizmodo

“If anyone could compress all that into a readable narrative, it would be Isaacson, the former managing editor of Time and author of magnificent biographies of Albert Einstein and Steve Jobs….The Innovators shows Isaacson at his best in segments where his talents as a biographer have room to run.”
— Dallas Morning News

“Fueled by entertaining anecdotes, quirky characters and a strong argument for creative collaboration, The Innovators is a fascinating history of all things digital, even for readers who align themselves more with Lord Byron than with his math-savvy daughter.”
— Richmond Times-Dispatch

“a significant addition to [Isaacson’s] list of best-selling nonfiction works with The Innovators. . . . Isaacson thoroughly examines the lives of such landmark personalities as Alan Turing, John von Neumann, J.C.R. Licklider, Robert Noyce,Bill Gates, Steve Wozniak, Tim Berners-Lee, Jobs and others. The most well-read of technocrats will still learn a lot from these thoroughly researched 542 pages. He shows with repeated examples that an Aha moment often went nowhere without the necessary collaborators to help flesh out the idea, or make it producible, or sell it. Collaboration is, indeed, a major theme of the book. . . . [The Innovators] reads as easily as the best of them. Isaacson truly has earned his spot on the best-seller lists.”
— Charleston Post and Courier

Walter Isaacson, University Professor of History at Tulane, has been CEO of the Aspen Institute, chairman of CNN, and editor of Time magazine. He is the author of Leonardo da Vinci; The Innovators; Steve Jobs; Einstein: His Life and Universe; Benjamin Franklin: An American Life; and Kissinger: A Biography, and the coauthor of The Wise Men: Six Friends and the World They Made. Facebook: Walter Isaacson, Twitter: @WalterIsaacson