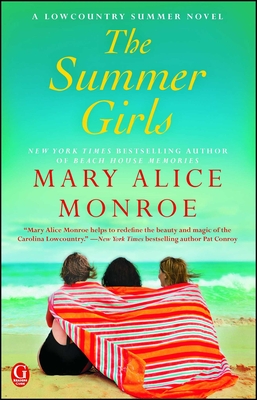 For years, Carson Muir has drifted, never really settling, certain only that a life without the ocean is a life half lived. Adrift and penniless in California, Carson is the first to return to Sea Breeze, wondering where things went wrong…until the sea she loves brings her a minor miracle. Her astonishing bond with a dolphin helps Carson renew her relationships with her sisters and face the haunting memories of her ill-fated father. As the rhythms of the island open her heart, Carson begins to imagine the next steps toward her future.

In this heartwarming novel, three sisters discover the true treasures Sea Breeze offers as surprising truths are revealed, mistakes forgiven, and precious connections made that will endure long beyond one summer.

"Mary Alice Monroe has taken the rich waters of the as her own field of dreams. In The Summer Girls,she sings a song of praise to the bottle-nosed dolphins that bring so much joy to the men and women who gaze at the creeks and rivers of the low country each evening. Like all her books, The Summer Girls is a call to arms."
— New York Times bestselling author Pat Conroy

"The Summer Girls is more than just a beautifully written, moving portrayal of three sisters finding themselves and each other after years of separation. It's also an important book that deals head-on with significant issues so skillfully woven into the narrative that I often stopped to consider the import of what I'd just read. If you're a dedicated environmentalist, this book is a must-read. If you're just someone who enjoys a good story, you'll get that, too, and much more."
— New York Times bestselling author Cassandra King

"The Summer Girls conveys sound environmental messages through a captivating story of how the ocean and a charismatic dolphin reunite sisters in the alluring ecological setting of the Lowcountry of South Carolina. The story resonates on a personal level and, moreover, delivers a powerful reminder of the importance of protecting dolphins and the environment in which they live."
— Patricia Fair, Director, Marine Mammal Program, NOAA

“In the bestselling tradition of Kathryn Stockett’s The Help, Mary Alice Monroe skillfully weaves together issues of class, women’s rights, and domestic abuse set in the tumultuous South during the 1970s. . . . Beautifully wrought, and rich with keen insight . . . an unforgettable tale of marriage, resilience, and one woman’s private strength.”
— Bookreporter

“Magical! Mary Alice Monroe's writing is always sensitive and true, and as inspiring as the natural wonder about which she writes. This luminous tale—set in the South Carolina Lowcountry that we both love so deeply—was hard to put down.”
— Dorothea Benton Frank

“Monroe brings authenticity and a sense of wonder to the plight of the endangered sea turtles and their miraculous capacity for survival.”
— Publishers Weekly

“Monroe utilizes her signature combination of informative storytelling wrapped in the relatable sagas of her protagonists.”
— Charleston City Paper

“An exquisite, many-layered novel of an unsolved mystery, an obsession, a reconciliation, and a little romance.... Treats readers to lush descriptions of nature."
— Booklist

"An author of power and depth."
— RT Reviews

"A consummate storyteller."
— The Best Reviews

"A strong, warm voice that brings the South to life."
— Powell's Book Review

"Mary Alice Monroe has written another novel that is helping to redefine the beauty and magic of the Carolina Lowcountry. Every book she has written has felt like a homecoming to me and...she has succeeded in making the marshes and rivers of the Lowcountry her literary home.... Haunting."
— New York Times bestselling author Pat Conroy

"Monroe makes her characters so believable, the reader can almost hear them breathing."
— Booklist

"A soaring, passionate story of loneliness and pain and the simple ability of love to heal and transcend both. Mary Alice Monroe's voice is as strong and true as the great birds of prey of whom she writes."
— Anne Rivers Siddons

"Mary Alice Monroe writes from her heart to the hearts of her readers."
— Charleston Post & Courier

"Such a wonderful, exciting new read! Very well written and addicting! Looking forward to the next book in the series. Mary Alice--hurry up!"
— Books Unlimited

"Mary Alice writes the most readable books with important environmental story lines, but "The Summer Girls"might be my favorite. It's about family, finding yourself, getting through bad issues that could weigh you down, and enjoying the ride with the warm embrace of family. And there's a wild dolphin who helps heal the pain but finds his own. This book has everything--sense of place, family, strong characters, romance,a love of dolphins and more. This is BETTER than a beach read; this is a great book club book to discuss! Can't wait for the next in the trilogy. thanks, Mary Alice!"
— First Reads

"How wonderful it is to be able to dig into a summer novel and not only get so much pleasure from the awesome story, but to learn, learn, learn...[S]he brings new awareness to those of us who need enlightening."
— Maurice on Books

"[A] beautifully written and thought provoking work of fiction. Mary Alice Monroe once again delivers on her promise to write books that explore the beauty in nature and the complexity of human relationships as she delves into the human psyche."
— Linda Hitchcock of Booktrib

Mary Alice Monroe is the New York Times bestselling author of more than twenty books, including the Beach House series: The Beach House, Beach House Memories, Swimming Lessons, Beach House for Rent, and Beach House Reunion. She is a 2018 Inductee into the South Carolina Academy of Authors’ Hall of Fame, and her books have received numerous awards, including the 2008 South Carolina Center for the Book Award for Writing, the 2014 South Carolina Award for Literary Excellence, the 2015 SW Florida Author of Distinction Award, the RT Lifetime Achievement Award, the International Book Award for Green Fiction, and the 2017 Southern Book Prize for Fiction. Her bestselling novel The Beach House is also a Hallmark Hall of Fame movie. She is the cocreator and cohost of the weekly web show and podcast Friends & Fiction. An active conservationist, she lives in the lowcountry of South Carolina. Visit her at MaryAliceMonroe.com and at Facebook.com/MaryAliceMonroe.

Dora’s initial reaction to Mamaw’s plan to bring the summer girls together for the season is to call it “blackmail” (p. 173). Do you agree with Dora, or are you sympathetic with Mamaw’s scheme? Why or why not?

Besides Harper, Carson, and Dora, Mamaw and Lucille have perhaps the most complex and important female relationship in the book. Describe their friendship. How do the two older women serve as role models to the younger three?

Mamaw plans to give her granddaughters their pearl necklaces early in the book, before we know Dora, Carson, or Harper very well as characters. What could you assume about each of the summer girls based on Mamaw’s choices for them? Were those assumptions accurate?

Carson is Mamaw’s favorite granddaughter: “It might have been because she’d spent the most time with the motherless girl when she’d come for extended stays after being unceremoniously dumped by her father when he was off on a jaunt. But Carson was also the most like Marietta, passionate about life and not afraid to accept challenges, quick to make up her mind, and a tall beauty with a long history of beaus” (p. 37). Which of the three sisters did you relate to most, and why?

Dora has not been open with her family concerning Nate’s autism. Do you think this was a decision on Dora’s part, or simply benign silence? What would prompt this? Do you think her hesitancy was ultimately more helpful or harmful for Nate?

Discuss how Parker’s legacy affected his mother and each of his three daughters. The negative sides of his alcoholism and abandonment are obvious, but can you identify any positive effects of his actions?

In addition to their individual conflicts with each other, Harper, Carson, and Dora each have a complicated relationship with their grandmother. While they love her, they each feel guilty about being gone from Sea Breeze for most of their adult lives and, at times, resent Mamaw for her meddling. What are Mamaw’s biggest faults in this novel? Why do you think Mamaw has decided to try “tough love” with her granddaughters?

Blake has to explain to Carson why befriending wild dolphins is dangerous not only to the dolphins themselves, but also to humans. Do you agree that Blake’s anger with Carson over Delphine’s life-threatening injuries is justified? Who do you think is most to blame?

Forgiveness is a major theme in this novel. Consider Carson’s history with her father and her mother and all the years of secrets, silence, and enabling. Carson has confrontations with Blake (over Delphine), Brian (over her theft), and Dora (over what Dora reveals about her mother’s death). How do all of these scenes lead to her growth as a character?

Carson and her grandmother are the two characters who were closest to Parker. How did Parker’s actions impact Mamaw and Carson’s relationship with each other, even after his death?

Throughout the novel, Carson is fearful of attachments— to a place, to a job, and especially to a man. Why do you think she suffers from an inability to commit? What role does Delphine play in helping her to connect again with her sisters? To Blake? To herself? What is Carson’s challenge at the end of the book?

The Summer Girls is the first book in Mary Alice Monroe’s trilogy about Sullivan’s Island. Predict what the next two books will have in store for Dora and Harper, Carson, Blake, and Delphine?