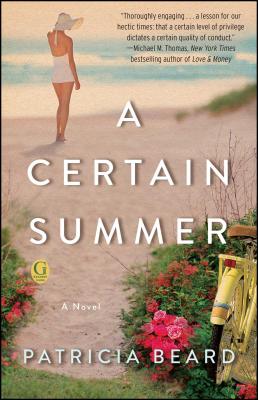 A richly evocative debut novel set in an exclusive summer colony along the east coast during the aftermath of World War II—for fans of Kate Morton and Jamie Ford.

"Nothing ever changes at Wauregan.” That mystique is the tradition of the idyllic island colony off the shore of Long Island, the comforting tradition that its summer dwellers have lived by for over half a century. But in the summer of 1948, after a world war has claimed countless men—even those who came home—the time has come to deal with history’s indelible scars.

Helen Wadsworth’s husband, Arthur, was declared missing in action during an OSS operation in France, but the official explanation was mysteriously nebulous. Now raising a teenage son who longs to know the truth about his father, Helen turns to Frank Hartman—her husband’s best friend and his partner on the mission when he disappeared. Frank, however, seems more intent on filling the void in Helen’s life that Arthur’s absence has left. As Helen’s affection for Frank grows, so does her guilt, especially when Peter Gavin, a handsome Marine who was brutally tortured by the Japanese and has returned with a faithful war dog, unexpectedly stirs new desires. With her heart pulled in multiple directions, Helen doesn’t know whom to trust—especially when a shocking discovery forever alters her perception of both love and war.

Part mystery, part love story, and part insider’s view of a very private world, A Certain Summer resonates in the heart long after the last page is turned.

Praise For A Certain Summer…

"The deepening relationship between Peter and Helen is portrayed subtly and convincingly. An engaging postwar melodrama."
— Booklist

"I'm crazy about A Certain Summer...For anyone who has a summer place that they have adored, this book will bring up memories. Layer in the mystery of what happened in the war, and you have one really satisfying read. Patricia is known for her nonfiction work, and that background definitely infused this work."
— Bookreporter

Patricia Beard is the author of nine nonfiction books and hundreds of nationally published magazine articles. She is the former features editor of Town & Country, former editor-at-large of Elle, and the former style features editor of Mirabella magazine. Beard is also the founder and president of Willowbrook Partners, LLC, for which she writes, oversees the design, and produces privately commissioned books.
or support indie stores by buying on