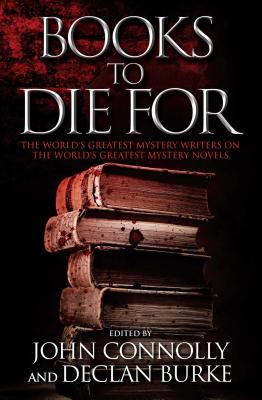 Books to Die For (Paperback)

In the most ambitious anthology of its kind, the world’s leading mystery writers come together to champion the greatest mystery novels ever written. In a series of personal essays that reveal as much about the authors and their own work as they do about the books that they love, over a hundred authors from twenty countries have created a guide that will be indispensable for generations of readers and writers. From Agatha Christie to Lee Child, from Edgar Allan Poe to P. D. James, from Sherlock Holmes to Hannibal Lecter and Philip Marlowe to Lord Peter Wimsey, Books to Die For brings together the best of the mystery world for a feast of reading pleasure, a treasure trove for those new to the genre and for those who believe that there is nothing new left to discover. This is the one essential book for every reader who has ever finished a mystery novel and thought…I want more!

Declan Burke has published six novels: Eightball Boogie (2003), The Big O (2007), Absolute Zero Cool (2011), Slaughter’s Hound (2012), Crime Always Pays (2014), and The Lost and the Blind (2015). Absolute Zero Cool received the Goldsboro/Crimefest "Last Laugh" Award for Best Humorous Crime Novel in 2012. He also is the editor of Down These Green Streets: Irish Crime Writing in the 21st Century (2011). He hosts a website dedicated to Irish crime fiction called Crime Always Pays.
or support indie stores by buying on
(This book is on backorder)
Copyright © 2020 American Booksellers Association