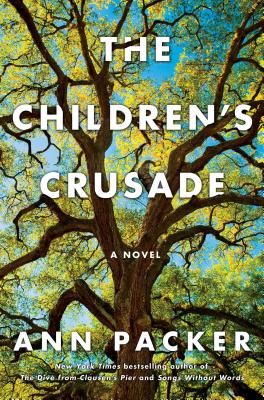 From the New York Times bestselling, award-winning author of The Dive From Clausen’s Pier, a sweeping, masterful new novel that explores the secrets and desires, the remnant wounds and saving graces of one California family, over the course of five decades.

Bill Blair finds the land by accident, three wooded acres in a rustic community south of San Francisco. The year is 1954, long before anyone will call this area Silicon Valley. Struck by a vision of the family he has yet to create, Bill buys the property on a whim. In Penny Greenway he finds a suitable wife, a woman whose yearning attitude toward life seems compelling and answerable, and they marry and have four children. Yet Penny is a mercurial housewife, at a time when women chafed at the conventions imposed on them. She finds salvation in art, but the cost is high.

Thirty years later, the three oldest Blair children, adults now and still living near the family home, are disrupted by the return of the youngest, whose sudden presence and all-too-familiar troubles force a reckoning with who they are, separately and together, and set off a struggle over the family’s future. One by one, the siblings take turns telling the story—Robert, a doctor like their father; Rebecca, a psychiatrist; Ryan, a schoolteacher; and James, the malcontent, the problem child, the only one who hasn’t settled down—their narratives interwoven with portraits of the family at crucial points in their history.

Reviewers have praised Ann Packer’s “brilliant ear for character” (The New York Times Book Review), her “naturalist’s vigilance for detail, so that her characters seem observed rather than invented” (The New Yorker), and the “utterly lifelike quality of her book’s everyday detail” (The New York Times). Her talents are on dazzling display in The Children’s Crusade, an extraordinary study in character, a rare and wise examination of the legacy of early life on adult children attempting to create successful families and identities of their own. This is Ann Packer’s most deeply affecting book yet.

Praise For The Children's Crusade: A Novel…

“In The Children’s Crusade, Ann Packer flawlessly executes the most daring, difficult and exhilarating feat in the novelist's repertoire: to re-create the history of an era and a place through the history of one family, finding intimacy in the sweep of time and import in the nuance of everyday life, pulling it off with mastery, authority and all the passionate artistry that lovers of her work have come to expect.”
— Michael Chabon, author of Telegraph Avenue

“Do our childhood experiences determine our destinies? In shimmering prose and with exceptional wisdom, Ann Packer examines the life of a California family, laying bare the relationships between brother and sister, parent and child, while at the same time revealing the ways in which the past casts both shadow and light on the present. The Children’s Crusade is a provocative, dazzling novel from a world-class fiction writer.”
— Christina Baker Kline, author of Orphan Train

"The Children's Crusade is an extraordinary tale of a physician, his wife and their four children. Set in Northern California, it is a coming-of-age tale of family as well as an American pastoral; the language is beautiful, painterly, even as it shows us how much of our adult identity has been fully formed in childhood. Ann Packer’s eye for detail, her genius at evoking an era with such faithfulness, and her mastery of story make us identify with and deeply care for her characters. This is a beautiful novel that will stay with me.”
— Abraham Verghese, author of Cutting for Stone

“Well-crafted… Packer is anaccomplished storyteller whose characters are as real as you might find aroundyour dinner table. Readers will be taken with this vibrant novel.”
— Publishers Weekly

“Packer is an expert at complicated relationships… Beautifully precise… When you read Packer, you'll know you're in the hands of a writer who knows what she's doing. A marvelously absorbing novel.”
— Kirkus (starred review)

“An artful portrait of a California family.”
— Elissa Schappell

"Tender, absorbing... Packer has great compassion for her characters, with their ancient injuries, their blundering desires. The way she tangles their perspectives perfectly, painfully captures the tumult of selves within a family. “
— Catherine Newman

"An absorbing novel which celebrates family even as it catalogs its damages."
— People Magazine (Book of the Week)

“Packer is an expert American realist at every level, from the interior monologue to the bird’s-eye view.”
— Boris Kachka

"A more ambitious work that succeeds beautifully. The beauty comes from the rich characterizations that make each of the Blairs spring to life. We do not like them all equally, but ultimately we come to know them equally... Packer’s dissection of domestic life reminds me of her elders in the field Anne Tyler and Louise Erdrich. But I’ve rarely read a novel so astute about the jumble of love and respect, rivalry and envy, empathy and scorn that makes up family dynamics. Packer is also a superb storyteller. “The Children’s Crusade” is as much plot-driven as character-driven. From its opening pages, the book seduces us into a world far from the present era, glides through ensuing decades, and finally drops us off in the 21st century."
— Dan Cryer

"Psychologically acute... provocative... Packer shows how unhappiness and happiness, selfishness and kindness, ricochet in complicated ways through relationships. This is a novel with something to teach about forgiving the people we love."
— Marion Winik

"As the details accumulate, as each character’s story builds, Packer’s writing gains depth and power. By the end, all the separate threads weave a complex, textured tapestry. What a gift to the reader, who will certainly recognize and identify with the novel’s universal themes of those knotted ties that bind, the varied meanings of home, and, in particular, the many ways the child is father to the man."
— Mameve Medwed

"Graceful, poignant... With her warm, nuanced portrayal of a family and its foibles, Packer delivers."
— Hannah Sampson

"Packer's portrayal of one family's breakdown is tragic and utterly engrossing."
— "O," The Oprah Magazine

"Packer has made complicated families her specialty... engaging writing, sense of place... The Children's Crusade [is] a journey worth taking."
— Yvonne Zipp

"A sublime and intelligent exploration of one family and its mythology of sorts... Ms. Packer is a wonderful portraitist, allowing childhood moments to unfold in all their riveting innocence (including a breathtakingly perfect, terribly sad music recital scene) and following the family as choices beget choices and lives intertwine or unwind... This entertaining,poetic novel layers a multitude of human contradictions, and what is most moving is that even with so much hostility and melancholy, the family story here is one of love.
It is about how we return again and again to understand, to make things right, even as we seek to move on from ancient pain."
— Lisa Jennifer Selzman

"Four grown siblings, driven together by deciding the fate of their childhood home,try to decipher the calculus of their parents’ troubled marriage in Packer’s elegant third novel."
— Kansas City Star (Best Books of 2015)

"A riveting novelabout how family molds us – for good and ill – and the grace that comes withforgiveness.”
— People Magazine (Top 10 Books of 2015)

Ann Packer is the acclaimed author of two collections of short fiction, Swim Back to Me and Mendocino and Other Stories, and two bestselling novels, Songs Without Words and The Dive from Clausen’s Pier, which received the Kate Chopin Literary Award, among many other prizes and honors. Her short fiction has appeared in The New Yorker and in the O. Henry Prize Stories anthologies, and her novels have been published around the world. She lives in San Carlos, California.