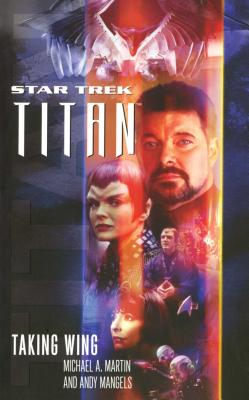 William Riker, former first officer of the USS Enterprise in Star Trek: The Next Generation, takes command of the new USS Titan in this white-knuckled adventure perfect for longtime and new Star Trek fans.

After almost a decade of strife against foes such as the Borg, the Cardassians, the Klingons, and the Dominion, the United Federation of Planets is at the dawn of a new era. Starfleet is renewing its mission of peaceful exploration, diplomacy, and the expansion of knowledge. Among the starships spearheading that endeavor is the USS Titan, commanded by Captain William T. Riker and manned by the most biologically varied and culturally diverse crew in Starfleet history.

But their mission does not begin according to plan.

In the wake of Star Trek: Nemesis, Praetor Shinzon, slayer of the Romulan Senate, is dead. The power vacuum created by his demise has put the Romulan Star Empire, longtime adversary of the Federation, at the brink of civil war. Competing factions now vie for control of their fragmenting civilization, and if the empire should fall, that entire area of the galaxy may destabilize.

To restore order to the region, Titan’s long-anticipated mission of exploration is delayed as Starfleet assigns Riker to set up power-sharing talks among the Romulan factions. But even as the first tentative steps are taken toward building a new Romulus, the remnants of the Tal Shiar, the dreaded Romulan intelligence service, are regrouping behind the scenes for a power play of their own. With no other help available, Riker and the Titan crew become the last hope to prevent the quadrant from falling into chaos.

Michael A. Martin’s solo short fiction has appeared in The Magazine of Fantasy & Science Fiction. He has also coauthored (with Andy Mangels) several Star Trek comics for Marvel and Wildstorm and numerous Star Trek novels and eBooks, including the USA Today bestseller Titan: Book One: Taking Wing; Titan: Book Two: The Red King; the Sy Fy Genre Award-winning Star Trek: Worlds of Deep Space 9 Book Two: Trill -- Unjoined; Star Trek: The Lost Era 2298—The Sundered; Star Trek: Deep Space 9 Mission: Gamma: Vol. Three: Cathedral; Star Trek: The Next Generation: Section 31—Rogue; Star Trek: Starfleet Corps of Engineers #30 and #31 ("Ishtar Rising" Books 1 and 2); stories in the Prophecy and Change, Tales of the Dominion War, and Tales from the Captain's Table anthologies; and three novels based on the Roswell television series. His most recent novels include Enterprise: The Romulan War and Star Trek Online: The Needs of the Many. His work has also been published by Atlas Editions (in their Star Trek Universe subscription card series), Star Trek Monthly, Dreamwatch, Grolier Books, Visible Ink Press, The Oregonian, and Gareth Stevens, Inc., for whom he has penned several World Almanac Library of the States nonfiction books for young readers. He lives with his wife, Jenny, and their two sons in Portland, Oregon.

Andy Mangels is the USA TODAY bestselling author and coauthor of over a dozen novels—including Star Trek and Roswell books—all cowritten with Michael A. Martin. Flying solo, he is the bestselling author of several nonfiction books, including Star Wars: The Essential Guide to Characters and Animation on DVD: The Ultimate Guide, as well as a significant number of entries for The Superhero Book: The Ultimate Encyclopedia of Comic-Book Icons and Hollywood Heroes as well as for its companion volume, The Supervillain Book. Andy is a national award-winning activist in the Gay community, and has raised thousands of dollars for charities over the years. He lives in Portland, Oregon, with his long-term partner, Don Hood, their dog, Bela, and their chosen son, Paul Smalley. Visit his website at AndyMangels.com.
Loading...
or support indie stores by buying on