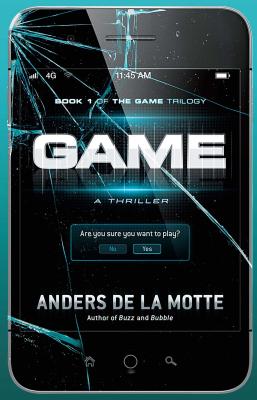 The first novel in a groundbreaking international thriller trilogy about a deadly game that blurs the line between reality and fiction.

One Sunday morning after a long night of partying, Henrik “HP” Pettersson, a slacker with a lot of ego and very little impulse control, finds a cell phone of an unfamiliar make on a commuter train. Through insisting and slightly uncanny messages that refer to him by name, the phone invites him to play a game. HP accepts without hesitation.

The rules are that HP must complete tasks that range from childish pranks to criminal acts, as allocated by the mysterious Game Master. HP is the perfect contender—alienated from society, devoid of morals, and desperate for fame. His completion of the assignments are filmed and uploaded onto a protected server where viewers rate the Players’ performances.

The Game starts out innocently enough and then becomes increasingly risky, threatening the safety of someone close to HP. He is determined to become a superstar, but when the dark and tragic secrets of his family’s past are at stake, HP must make a choice. Will he suffer the humiliation of defeat, or will the need to win push him to the limit—no matter the cost?

First in a fast-paced and riveting trilogy, Game will leave you guessing. Follow the rules, and everybody gets hurt...

Praise For Game: A Thriller…

“A taut thriller that will leave the reader excited for the next book in the series.”
— Kirkus Reviews

“GAME is one of those novels that has layers within layers. Just when you think you've got it all figured out, a new twist emerges… the first book in what promises to be an exhilarating new trilogy.”
— Fresh Fiction

“A high voltage, high tech thriller of a trilogy…fast paced and full of surprises…a suspenseful and intelligent read.”
— The Novel Pursuit

“What I loved about The Game is the energythat came with reading it. It was action-packed and featured moments that mademe gasp, giggle, and shake my head. It was an enjoyable read that I could losemyself in and I wanted to continue reading.”
— Marianne de Pierres’ Escape Club

Anders de la Motte is the author of Game, Buzz, and Bubble. He has worked as a police officer and the director of security at one of the world’s largest IT companies. He now works as an international security consultant in addition to being Sweden’s most exciting and innovative new thriller writer.
Loading...
or support indie stores by buying on