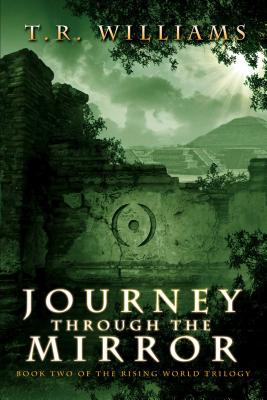 Journey Through the Mirror

Following Journey Into the Flame—“a spiritual adventure of the first order” (New York Times bestselling author Felix Palma)—comes the second part in a post-apocalyptic trilogy about a set of ancient books that hold the key to humanity’s survival.

In 2030, after the Great Disruption brought humanity to the brink of a second dark age, the Chronicles of Satraya were discovered, restoring hope in the world. But the secret powers in their pages remained largely unknown.

There were some, however, who understood them. The Reges Hominum, the Kings of Men, a clandestine group influencing history from the shadows, sought to use their hidden gifts to regain world control. But their plans were foiled by an unlikely group: Alain Perrot, an eccentric old man and former member of the Council of Satraya; Special Agent Valerie Perrot, his daughter; and Logan Ford, a young painter who discovered he was the son of one of the Chronicles’ original finders, long since murdered in an effort to protect them.

Soon, seemingly unrelated global events pull Logan and his allies into another contest with those enemies determined to bring a rising world back down. The earth’s still-recovering energy supply is put at risk. Illnesses spread. Earthquakes without epicenters shatter the land. And the only things holding the world together are the Chronicles, connected to a series of scattered, hidden mirrors around the globe.

With T.R. Williams’s trademark excitement, mystery, magic, and deep wisdom, the second book in the Rising World trilogy ensures that you will never look at your reflection the same way again.

Praise For Journey Through the Mirror: Book Two of the Rising World Trilogy…

Praise for Journey Into the Flame

T. R. Williams divides his time between Seattle and Chicago. He is a scholar of ancient texts and loves to ponder the mysteries of life.
Loading...
or
Not Currently Available for Direct Purchase