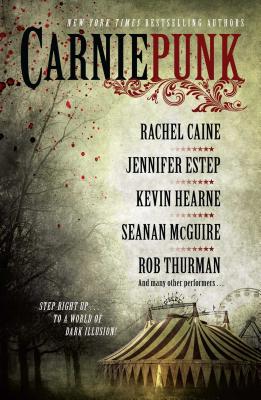 Come one, come all! The Carniepunk Midway promises you every thrill and chill a traveling carnival can provide. But fear not! Urban fantasy’s biggest stars are here to guide you through this strange and dangerous world. . . .

RACHEL CAINE’s vampires aren’t child’s play, as a naïve teen discovers when her heart leads her far, far astray in “The Cold Girl.” With “Parlor Tricks,” JENNIFER ESTEP pits Gin Blanco, the Elemental Assassin, against the Wheel of Death and some dangerously creepy clowns. SEANAN McGUIRE narrates a poignant, ethereal tale of a mysterious carnival that returns to a dangerous town after twenty years in “Daughter of the Midway, the Mermaid, and the Open, Lonely Sea.” KEVIN HEARNE’s Iron Druid and his wisecracking Irish wolfhound discover in “The Demon Barker of Wheat Street” that the impossibly wholesome sounding Kansas Wheat Festival is actually not a healthy place to hang out. With an eerie, unpredictable twist, ROB THURMAN reveals the fate of a psychopath stalking two young carnies in “Painted Love.”

Rob Thurman is the author of the Cal Leandros series, the Trickster series, and the Korsak Brothers novels, and has been a Goodreads Choice, Romantic Times Reviewers’ Choice, and an Eliot Rosewater Award nominee. Rob’s work is dark, nonstop action from beginning to end, rife with purely evil sarcasm as sharp as a switchblade—and probably nearly as illegal. Contact the author at RobThurman.net and @Rob_Thurman.

Allison Pang is the author of the urban fantasy Abby Sinclair series, as well as the writer for the webcomic Fox & Willow. She likes LEGOS, elves, LEGO elves…and bacon. She spends her days in Northern Virginia working as a cube grunt and her nights waiting on her kids and cats, punctuated by the occasional husbandly serenade. Sometimes she even manages to write. Mostly she just makes it up as she goes.

Kelly Gay is the critically acclaimed author of the Charlie Madigan urban fantasy series. She is a multi-published author with works translated into several different languages. She is a two-time RITA nominee, an ARRA nominee, a Goodreads Choice Award Finalist, and a SIBA Book Award Long List finalist. Kelly is also the recipient of the North Carolina Arts Council Fellowship Grant in Literature. She has authored the short story, “Into the Fire,” featured in Halo: Fractures, and the novella, Halo: Smoke and Shadow. She can be found online at KellyGay.com.

A native of the Delaware seashore, Kelly Meding lives in Maryland, with a neurotic cat that occasionally meows at ghosts. After discovering Freddy Krueger at a very young age, Kelly began a lifelong obsession with horror, science fiction, and fantasy, on which she blames her interest in vampires, psychic powers, superheroes, and all things paranormal. When not writing, she can be found crafting jewelry, enjoying a good cup of coffee, or scouring the Internet for gossip on her favorite television shows.
Loading...
or support indie stores by buying on