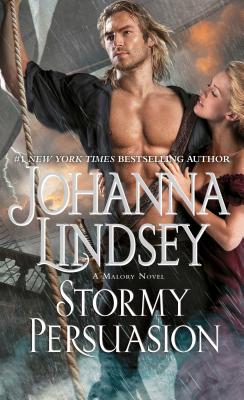 #1 New York Times bestselling author Johanna Lindsey returns to the dazzlingly passionate world of the Malorys, an aristocratic family of rakehell adventurers and spirited ladies, in a thrilling new tale of unbridled desires.

Judith and Jacqueline Malory are not simply cousins; they are inseparable best friends. Refusing to miss Jacqueline's come-out in Connecticut, Judy convinces her parents, James and Georgina, to let her delay her London debut by a few weeks so she can accompany her cousin. Neither girl intends to fall in love during her first Season. But Judy's plans are overturned when aboard ship she comes face-to-face with the ghost who has been haunting her dreams.

Unknown to the Malorys, deckhand Nathan Tremayne is a smuggler with a noose around his neck. Determined to carry out a covert mission in America that could gain him a pardon, Nathan senses that Judith is trouble. Somehow the minx knows his secret—and now she's blackmailing him into doing her bidding—teaching her how to climb the rigging and how to kiss. While passions can soar on the high seas, Nathan knows this aristocratic beauty is merely amusing herself with a scoundrel like him.

When the unthinkable happens in Connecticut and the elder Malorys' hands are tied, Nathan takes command of a dire situation. Captaining his own ship, he turns the tables on Judy and steers them into uncharted waters, where a lady might just throw caution to the wind and give her heart to a scoundrel.

"This is the story Malory pirate fans have been waiting for, and this consummate storyteller doesn't disappoint. There's adventure, sensuality, battles, storms, family high jinks and rapier wit. Best of all are the father-daughter relationships that add humor and pathos--and if that isn't enough, there's a slew of Malory family members to satisfy everyone who wants to see their old friends in new adventures as a new generation makes waves. Lindsey delivers!"
— Romantic Times

"The Malorys are the family everyone wishes they had, so returning to their world is like entering a bit of heaven. The way Lindsey expertly writes a seductive battle of wills love story is magic; love, laughter, adventure and passion collide as childhood foes become lovers."
— Romantic Times (Top Pick)

Johanna Lindsey (1952–2019) was world-renowned for her “mastery of historical romance” (Entertainment Weekly), with more than sixty million copies of her novels sold. She was the author of nearly sixty nationally bestselling novels, many of which reached the #1 spot on the New York Times bestseller list.
Loading...
or support indie stores by buying on