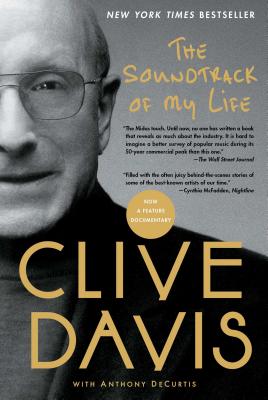 The Soundtrack of My Life

Orphaned in his teens, Davis earned a full scholarship to New York University and another to Harvard Law School. He served as General Counsel of Columbia Records and, in a totally unexpected stroke of fate, became head of the company overnight. More surprisingly, he learned he had “ears,” a rare ability to spot special talent and hit records. Those ears contributed to the success of three companies—Columbia, Arista, and J—where Davis dis­covered and developed more unique artists than anyone in the history of the music industry.

What began on the grass at the Monterey Pop Festival with the signing of Janis Joplin has evolved into a lifelong passion and calling, spanning genres, including rock, pop, R&B, country, jazz fusion, and hip-hop. His is the imprimatur that has helped shape contemporary music and, over the years, our popular culture.

The Soundtrack of My Life is an essential book for anyone interested in the story of popular music, the fascinating ups and downs of the music business, the alchemy of hits, and the dramatic life of a brilliant leader...and listener. It is a riveting read from beginning to end.

Praise For The Soundtrack of My Life…

“The Midas Touch. Until now, no one has written a book that reveals as much about the industry as Mr. Davis’ book does. It is hard to imagine a better survey of popular music during its 50 year commercial peak than this one.”
— The Wall Street Journal

"The pages of The Soundtrack of My Life are filled with fantastic scenes and revelations."
— The Los Angeles Times

“His enormous success comes from luck and a phenomenal gift for recognizing, nurturing and selling talent. His drive helped make him one of the most visionary music men. In his memoir, The Soundtrack of My Life, the man who guided stars from Springsteen to Houston shares the secrets of his success.”
— People

“Who put the bomp, Barry Mann asked in his 1961 single, in the bomp bah bomp bah bomp? Mr. Mann wanted to shake that person’s hand. For much of the 1960’s, 70’s, 80‘s 90’s and 00’s, a pretty good answer to that existential question was Clive Davis. As the head of Columbia Records and then Arista, the label he founded, Mr. Davis had a knack for introducing good singers to good material. The results tended to be explosive, as if he were dropping packages of Mentos into two-liter bottles of Diet Coke.”
— The New York Times

“There are so many incredible stories; this book is literally a walk through musical history.”
— Ryan Seacrest

“The book shows why Davis holds a rarefied status in the music world — an executive almost as famous as his performers.”
— Associated Press

Clive Davis is the Chief Creative Officer of Sony Music. He has worked with innumerable musical stars and media personalities. Born and raised in Brooklyn, he attended New York University and Harvard Law School.

Anthony DeCurtis is a contributing editor at Rolling Stone, where his work has appeared since 1980. He has written for numerable music and entertainment magazines and newspapers. A former on-air correspondent and editorial director at VH1, he has contributed to a myriad of television specials and programs. DeCurtis holds a PhD in American literature from Indiana University and he teaches at the University of Pennsylvania and the Gradudate School of Journalism at the City University of New York.
Loading...
or support indie stores by buying on