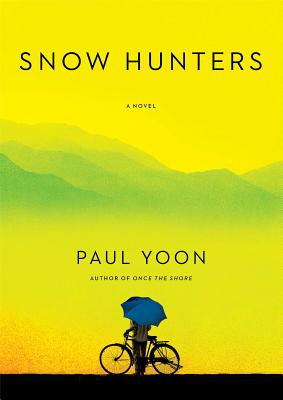 A haunting literary debut of a Korean POW learning to adapt to a new life in Brazil from the novelist New York Magazine calls a “quotidian-surreal craft-master.”

Snow Hunters traces the extraordinary journey of Yohan, who defects from his country at the end of the Korean War, leaving his friends and family behind to seek a new life on the coast of Brazil. Throughout his years there, four people slip in and out of his life: Kiyoshi, the Japanese tailor for whom he works; Peixe, the groundskeeper at the town church; and two vagrant children named Santi and Bia. Yohan longs to connect with these people, but to do so he must let go of his traumatic past.

In Snow Hunters, Yoon proves that love can dissolve loneliness, that hope can wash away despair, and that a man who has lost a country can find a new home. This is a heartrending story of second chances, told with unerring elegance and tenderness.

“Yoon’s gift as a writer is to reveal the meaning in the smallest moments…A subtle, elegant, poignant read.”
— Oprah.com

“A trim, fable-like book that proves to have a surprising amount of heft…Yoon is a lyrical writer, weaving taut and simple sentences with expanded and rhythmic ones. Every line is engineered to matter in a book like this one…Yoon is expert at zooming in on the transformative moment and pulling back to capture the flow of history.”
— Minneapolis Star-Tribune:

"A spare novel, set in an unexpected bypath of history... At a certain point, I realized this wasn't going to be a regular novel—where we watch who does what to whom—but a book about solitude, the hardest thing to frame fiction around. The transplanted Yohan is a great observer of the physical world, but he can only reflect so far; other people are mysteries to him. Who would think you could make a story out of this? Mystery in the wider sense is what this novel evokes."
— Joan Silber, "Favorite Books of 2013"

“Snow Hunters doesn’t show any signs of catering to the masses. Electing lyricism over plot, texture over drama, Snow Hunters is a reserves, patient, and ultimately singular book.”

Paul Yoon is the author of two story collections, Once the Shore, which was a New York Times Notable Book, and The Mountain, which was a NPR Best Book of the Year. His novel Snow Hunters won the Young Lions Fiction Award. A recipient of fellowships from the New York Public Library’s Cullman Center for Writers and Scholars and the National Endowment for the Arts, he lives in Cambridge, Massachusetts, with his wife, the fiction writer Laura van den Berg, and their dog, Oscar.