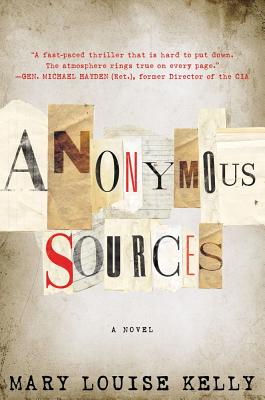 A fast-paced international thriller in the vein of Janet Evanovich by former NPR anchor and correspondent Mary Louise Kelly, about a Pakistani terrorist’s nuclear threat to blow up the White House.

Intent on escaping the demons of her past, Alex knows how to outwork, outdrink, and outshop anyone else around. Now she is focused on what could be “the story of a lifetime”—chasing leads from Harvard Yard to the courtyards of Cambridge, England, from a clandestine rendezvous in London to the inside of a nuclear terrorist network. But when she goes to Washington, DC, for a key interview that promises to tie everything together, Alex the hunter becomes Alex the hunted. An assassin is dispatched…her laptop disappears…her phone is tapped…and she begins to grasp that Thom Carlyle may have been killed to hide a terrifying conspiracy within the White House itself.

“Kelly has mastered the mental geographies of the journalist, the terrorist, and the spy:  The competing ideals, the gritty reality, and the layers of wisdom or self-deception they employ in reconciling them.  You won’t put this down.”
— Bob Grenier, former CIA Head of Counterterrorism and former CIA Station Chief in Pakistan

"Mary Louise Kelly blends the worlds she knows so well--Harvard, Cambridge, Washington, the news room and the American intelligence community--into a fast paced thriller that is hard to put down.  The atmosphere rings true on every page as she weaves a taut tale from a young man's apparent suicide to a terrorist attempt at the highest seat of American power."
— Michael Hayden, former Director of the CIA

"A great spy thriller..I couldn't put it down. The plot's great and the details are delicious."
— Joel Brenner, Former Inspector General of the National Security Agency and author of America the Vulnerable

"An authentic view of the media, intelligence, and terrorism that is a real page turner. Kelly gets how the national security world really works."
— Richard A. Clarke, former White House Counterterrorism Chief and author of The Scorpion’s Gate

Mary Louise Kelly has written two novels, The Bullet and Anonymous Sources, and spent two decades traveling the world as a reporter for NPR and the BBC. As an NPR correspondent covering the intelligence beat and the Pentagon, she has reported on wars, terrorism, and rising nuclear powers. A Georgia native, Kelly was educated at Harvard and at Cambridge University in England. She lives in Washington, DC, with her husband and their two children. Learn more at MaryLouiseKellyBooks.com.