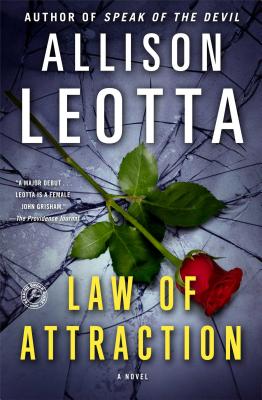 The first book in the Anna Curtis series takes readers on an exhilarating ride through the criminal justice system as a young prosecutor battles a disturbing murder case that conflicts dangerously with her own personal life.

As a newly minted Assistant US Attorney in Washington, DC, Anna Curtis has already developed a thick skin to help her deal with the unsettling brutality she encounters daily with her overflowing stack of domestic violence cases. Yet when Laprea Johnson walks into Anna’s life—battered by her boyfriend on the morning after Valentine’s Day—there’s something about this particular case that Anna can’t quite shake, something that reminds the prosecutor of her own troubled past.

“A beautifully written and suspenseful debut” (Barbara Delinsky, author of Not My Daughter) from “an up-and-coming literary giant” (Suspense Magazine), Law of Attraction provides a fascinating glimpse into the most emotional cases of DC’s criminal justice system.

“This is a major debut, and Leotta is a female John Grisham."
— The Providence Journal

“With this riveting debut legal thriller, Leotta joins the big leagues with pros like Lisa Scottoline and Linda Fairstein. A vulnerable, tenacious heroine, surprising twists and turns, and equal parts romance and danger are a recipe for success. Readers will feverishly hope for a second book.”
— Library Journal (starred review)

“A beautifully written and suspenseful debut, offering not only an inside look at crime and the courts in DC, but an exploration of the family dynamics that affect so much of who we are and what we do.”
— Barbara Delinsky