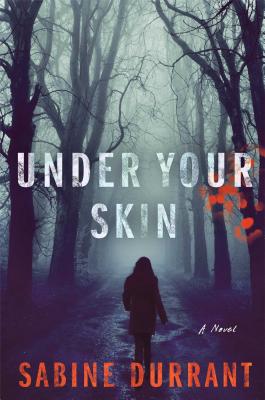 Under Your Skin (Hardcover)

In this page-turning debut from talented crime writer Sabine Durrant, a woman makes a chilling discovery in the woods that changes her life forever.

Gaby Mortimer is the woman who has it all. But everything changes when she finds a body on the common near her home. She’s shaken and haunted by the image of the lifeless young woman, and frightened that the killer, still at large, could strike again.

Before long, the police have a lead. The evidence points to a very clear suspect. One Gaby never saw coming . . .

Full of twists and turns, this is a dark and suspenseful psychological thriller that will make you secondguess everything. Because you can never be too sure about anything, especially when it comes to murder.

Sabine Durrant is a former assistant editor of The Guardian and a former literary editor at The Sunday Times whose feature writing has appeared in numerous British national newspapers and magazines. She is currently a magazine profile writer for The Sunday Telegraph and a contributor to The Guardian’s family section. She lives in south London with her partner, sportswriter Giles Smith, and their three children.

Praise For Under Your Skin: A Novel…

"Durrant skillfully keeps the twisty story on track... right up to the shocking conclusion."

"Durrant's story is meticulous and detail-laden... probably [her] best to date."

"This psychological thriller is recommended for fans of Gone Girl and Lisa Unger's Fragile."

"Sabine Durrant offers more twists than a roller coaster in her thriller Under Your Skin, which proves you can trust no one."

"The book doesn't leave one moment for the reader to be bored and I couldn't put it down. Psychological thriller? That's putting it mildly.... Get yourself a copy, lock the door and settle in for a ride you won't forget."

“The denouement will make you want to read it all over again to search for the clues you missed the first time.”

"Sabine Durrant’s first foray into crime fiction, Under Your Skin had hooked me from the start."

"Sabine Durrant is a talented and gifted story teller."

"In terms of riveting, can't-put-it-down mysteries, this book absolutely qualifies... This is the sort of book you want to tell your friends about, to be the one who recommended it to others."
or
Not Currently Available for Direct Purchase
Copyright © 2020 American Booksellers Association