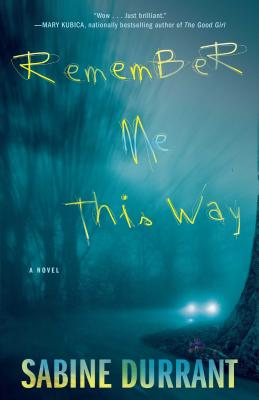 Remember Me This Way

A gripping psychological thriller of secrets and obsession that will keep readers flipping pages to the stunning conclusion from the author whose suspenseful work has been described as “meticulous and detail-laden, with plenty of red herrings” (Kirkus Reviews).

One year after her husband Zach’s death, Lizzie Carter goes to lay flowers on the site of his fatal accident. Since the tragedy, she just hasn’t been the same, wracked with grief and guilt and regret and…relief. Even though her friends tell her she’s grieved enough for her “prince charming,” her memories of a darker side of Zach that no one else knew are burned into her brain and won’t let her forget him. But as she lays her flowers down at the roadside, she sees a bouquet of lilies at the foot of the tree. Addressed to her husband. She isn’t the first to pay her respects…but who is Xenia?

As Lizzie learns more about her husband’s past, she begins to realize that maybe she didn’t know Zach at all. But she’s still tormented by her guilt and the memories that just won’t fade…because Zach doesn’t seem to be as gone as everyone thinks. And she just can’t shake the feeling that he’s still out there, watching her, waiting to claim her as his own once again.

After all, just because we love someone doesn’t mean we can trust them…

Praise For Remember Me This Way: A Novel…

“Durrant develops her character skillfully as she builds tension in this involving novel of psychological suspense with a lingering undercurrent of sadness.”

“Undeniable growth and sharpened literary skills since her first novel.”

"[A] riveting mystery that is fast paced and quite engrossing."

"A fascinating mystery and deft writing make this a must read for fans of psychological thrillers."

“Suspense builds with each page as secrets are revealed and the sense of menace grows at each turn.”

“Durrant steadily builds suspense up to the unexpected and thoroughly satisfying conclusion.”

“I cannot remember having read a book with this much suspense in quite some time.”

“Let's just say that I needed something that would really keep my interest after a couple of ho hum books. This was it!”

Sabine Durrant is a former assistant editor of The Guardian and a former literary editor at The Sunday Times whose feature writing has appeared in numerous British national newspapers and magazines. She is currently a magazine profile writer for The Sunday Telegraph and a contributor to The Guardian’s family section. She lives in south London with her partner, sportswriter Giles Smith, and their three children.
Loading...
or support indie stores by buying on