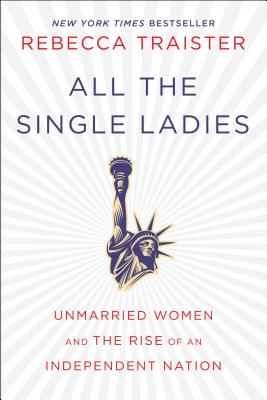 All the Single Ladies

“An informative and thought-provoking book for anyone—not just single ladies” (The New York Times Book Review), All the Single Ladies is a remarkable portrait of contemporary American life and how we got here, through the lens of the unmarried American woman. Covering class, race, sexual orientation, and filled with vivid anecdotes from fascinating contemporary and historical figures, “we’re better off reading Rebecca Traister on women, politics, and America than pretty much anyone else” (The Boston Globe).

Praise For All the Single Ladies: Unmarried Women and the Rise of an Independent Nation…

PRAISE FOR ALL THE SINGLE LADIES

“Fascinating, entertaining, surprising—and heartening. A brilliant book that is also warm, funny, and a pleasure to read.”
—Katha Pollitt

"Traister is a triple threat--essayist, journalist, and polemicist--bringing a seismic shift to light, hunting down its implications, and showing how it changes politics, and how policy needs to change to reflect it. Her book demands not just reading but discussion and debate.
—Boris Kachka, Vulture

“A singularly triumphant work of women presented in beautiful formation... Keenly mindful of race, ethnicity and socioeconomic status…[Traister] is both deliberate and conversant in her language of inclusion…As impressively well researched as All the Single Ladies is...it's the personal narratives drawn from more than 100 interviews she conducted with all manner of women that make the book not just an informative read but also an entirely engaging one.”
—Los Angeles Times

“A well-researched, deeply informative examination of women’s bids for independence, spanning centuries…Traister provides a thoughtful culling of history to help bridge the gap between, on the one hand, glib depictions of single womanhood largely focused on sexual escapades and, on the other, grave warnings that female independence will unravel the very fabric of the country…[she] brings a welcome balance of critique and personal reflection to a conversation that is often characterized more by advocacy and moral policing than honest discovery…All The Single Ladies is arriving just in time. This is an informative and thought-provoking book for anyone – not just the single ladies – who wants to gain a great understanding of this pivotal moment in the history of the United States.”
—New York Times Book Review (Editor’s Choice)

“Powerful and convincing…we’re better off reading Rebecca Traister on women, politics, and America than pretty much anyone else. [Traister is] one of the nation’s smartest and most provocative feminist voices.”
—The Boston Globe

“The enormous accomplishment of Traister’s book is to show that the ranks of women electing for nontraditional lives…have also improved the lots of women who make traditional choices, blowing open the institutions of marriage and parenthood…This rich portrait of our most quietly explosive social force makes it clear that the ladies still have plenty of work to do.”
—Slate

“A monumental study of the political, economic, social, and sexual consequences of the rise of unmarried women.”
—New Republic

“Lucid and well-researched…[Traister] vividly illustrates the collective power of single women in guiding legal, economic, and social progress and in ‘asserting themselves as citizens—full citizens—in ways that American men have for generations.’ A chapter on female friendships satisfyingly conveys the complexity of a significant, and often dismissed, relationship.”
—The New Yorker

“Personal and relatable…[Traister’s] assessment of single women’s sex lives is so balanced and ordinary-sounding that it becomes extraordinary in a world where Tinder is supposedly bringing a dating apocalypse…I’ll swipe right on that message any day.”
—Washington Post

“Though Traister is no longer one of us, she retains her memories and her empathy, as well as her feminist commitments…Drawing on, historical and contemporary sources, as well as her own reporting, she has produced a wide-ranging, insistently optimistic analysis of the role of single women in American society.”
—Chicago Tribune

“I can’t begin to count the number of conversations I’ve had in my adult life about my lack of enthusiasm to marry… Thankfully, with the publication of Rebecca Traister’s All the Single Ladies: Unmarried Women and the Rise of an Independent Nation, I can stop explaining and buy her book for all the busybodies in my happily unmarried life. Traister blends history, reportage and personal memoir to propose that the notion of marriage in American life has been and will be written by unmarried women.”
—The Guardian (US)

“Traister’s illuminating history of women who haven’t put a ring on it, whether by choice or by chance, is smartly placed in a larger historical context and enriched by compelling personal narratives.”
—Entertainment Weekly, Best Books of 2016 So Far select

“Traister is one of the sharpest journalists writing about feminism today, and her look into the link between eras with large numbers of unmarried women and periods of drastic social change is absolutely riveting… It turns out the history of unmarried women in this country is a fascinating one, which Traister recounts in compulsively readable detail, combining facts with personal stories from single ladies across racial and financial spectrums. What’s left after she joyfully dismantles conservative arguments about the death of wifely servitude is hope: ‘Ring on it’ or not, the paths open to women today are varied and bright.”
—Entertainment Weekly

In this intelligent book, Traister looks at the many reasons for choosing a patch that would have been cultural and economic suicide 50 years ago. She wants single women to recognize themselves as a political force and to celebrate unmarried life for what it can be: an excellent option.”
—People Magazine

“Wonderfully inclusive, examining single women from all walks of life—working-, middle-, and upper-class women; women of color and white women; queer and straight ones…With All the Single Ladies, [Traister] brings her trademark intelligence and wit to bear, interspersing her own experiences and observations with dozens of interviews with women all over the country, plus historical context, from so-called Boston marriages (the nineteenth-century name for women who lived together) and the Brontë sisters to Murphy Brown and Sex and the City.”
—Elle Magazine

“No husband, NP…In All The Single Ladies, an exhaustive examination of independent women and how they shaped the world we live (and date) in today, Rebecca Traister explodes the centuries-old notion that mirage is compulsory to living a happy, fulfilled life and reveals the inestimable power of being blissfully unattached.”
—Cosmopolitan

“All The Single Ladies is essential, careful, bold, and rigorous; it’s a warning and a celebration, and I loved it.”
—Jezebel

“[All The Single Ladies] has the potential to become a seminal text on female identity in the West…Traister expertly paints a modern portrait of American life and how we got here, with an intersectional approach that accounts for class, race, and sexual orientation. Even more impressive is how Traister pushes a feminist agenda without the book ever feeling like it has an agenda, or that it's pointing the finger at the reader to make him or her feel guilty.”
—VICE

“A well-written and unabashedly feminist analysis of the history and current situation of single women in America.”
—Newsday

“Exploring all aspects of single life—social, economic, racial, and sexual—Traister’s comprehensive volume, sure to be vigorously discussed, is truly impressive in scope and depth while always managing to be eminently readable and thoughtful.”
—Booklist (starred review)

“[Traister is] a thoughtful journalist…This fast-paced, fascinating book will draw in fans of feminism, social sciences, and U.S. history, similar to Gail ­Collins’s When Everything Changed.”
—Library Journal

“Incorporating a lively slew of perspectives of single ladies past and present, Traister conducts a nuanced investigation into the sexual, economic, and emotional lives of women in America and the opportunities available when marriage is no longer “the measure of female existence.”…Traister is funny and fair in how she deals with the prevalent stereotypes and remaining stigmas attached to being an unmarried woman in society…an invigorating study of single women in America with refreshing insight into the real life of the so-called spinster.”
—Publishers Weekly

“Cogent and provocative…a persuasive case for why unmarried women have grown into a potent political and social force…Readers will also appreciate Traister's willingness to recount, with candor and humor, experiences in her own life that fit into the larger national story. This is a fascinating book—and an important one.”
—Bookmark/Politics & Prose Blog

“Timely and important…a significant addition to the literature of sociology and women’s studies…Clearly this book belongs right up there with those by Gloria Steinem, Gail Collins, and other feminist writers who shine a light on contemporary life as few others can.”
—New York Journal of Books

"One of the most powerful voices in a new generation of American feminist writers."
--Walter Russell Mead, Foreign Affairs

"The most brilliant voice on feminism in this country."
--Anne Lamott, author of Bird by Bird

"A clear-eyed, whip-smart observer of the political scene."
--Daphne Merkin, author of The Fame Lunches

"The heir to the tradition of Mary McCarthy and Joan Didion."
--Eric Alterman, author of The Cause

Rebecca Traister is writer at large for New York magazine and a contributing editor at Elle. A National Magazine Award finalist, she has written about women in politics, media, and entertainment from a feminist perspective for The New Republic and Salon and has also contributed to The Nation, The New York Observer, The New York Times, The Washington Post, Vogue, Glamour and Marie Claire. She is the author of All the Single Ladies and the award-winning Big Girls Don’t Cry. She lives in New York with her family.