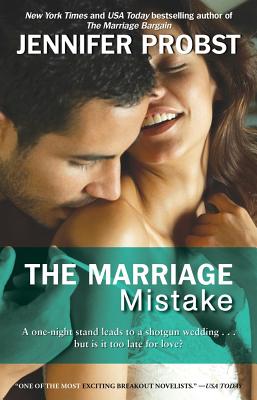 The Marriage Mistake (Marriage to a Billionaire #3) (Paperback)

The exciting bestselling author who thrilled readers with The Marriage Bargain and The Marriage Trap, Jennifer Probst rounds out her sizzling trilogy with more “nonstop sexual tension” (Laura Kaye).

Carina Conte has had a crush on her brother Michael’s best friend, Max Gray, since she was a teenager. Now she’s earned her MBA and come to work at Michael’s new venture, America’s fastest-growing bakery empire. But some things never change: her family still treats her like a child. With three drop-dead gorgeous siblings, she’s still the ugly duckling of the bunch. And Max, the company’s new CEO, still barely notices her.

Max knows Carina Conte is strictly off limits. But hot-blooded lust wins out at a conference when the two share a scorching one-night stand—and are busted by her mother! Now, forced by old-world Italian tradition into a marriage he’s not ready for, Max is miserable—and Carina is furious. Her new husband is about to realize that hell hath no fury like a woman transformed….

Jennifer Probst wrote her first book at twelve years old. She bound it in a folder, read it to her classmates, and hasn’t stopped writing since. She took a short hiatus to get married, get pregnant, buy a house, get pregnant again, pursue a Master’s degree in English literature, and rescue two shelter dogs. Now she is writing again. She is the New York Times, USA TODAY, and Wall Street Journal bestselling author of sexy and erotic contemporary romance. She was thrilled her book, The Marriage Bargain spent twenty-six weeks on the New York Times bestseller list. Her work has been translated in over a dozen countries, sold over a million copies, and was dubbed a “romance phenom” by Kirkus Reviews. She makes her home in upstate New York with the whole crew. Her sons keep her active, stressed, joyous, and sad her house will never be truly clean.
or
Not Currently Available for Direct Purchase
Copyright © 2020 American Booksellers Association