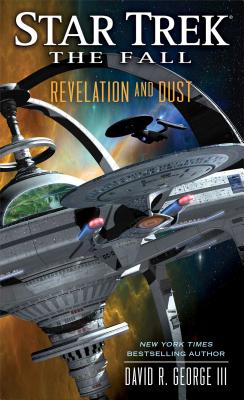 WELCOME TO THE NEW DEEP SPACE 9

After the destruction of the original space station by a rogue faction of the Typhon Pact, Miles O’Brien and Nog have led the Starfleet Corps of Engineers in designing and constructing a larger, more advanced starbase in the Bajoran system. Now, as familiar faces such as Benjamin Sisko, Kasidy Yates, Ezri Dax, Odo, and Quark arrive at the new station, Captain Ro Laren will host various heads of state at an impressive dedication ceremony. The dignitaries include not only the leaders of allies—such as Klingon Chancellor Martok, Ferengi Grand Nagus Rom, the Cardassian castellan, and the Bajoran first minister—but also those of rival powers, such as the Romulan praetor and the Gorn imperator. But as Ro’s crew prepares to open DS9 to the entire Bajor Sector and beyond, disaster looms. A faction has already set in action a shocking plan that, if successful, will shake the Alpha and Beta Quadrants to the core.

And what of Kira Nerys, lost aboard a runabout when the Bajoran wormhole collapsed? In the two years that have passed during construction of the new Deep Space 9, there have been no indica­tions that the Celestial Temple, the Prophets, or Kira have sur­vived. But since Ben Sisko once learned that the wormhole aliens exist nonlinearly in time, what does that mean with respect to their fate, or that of the wormhole . . . or of Kira herself?