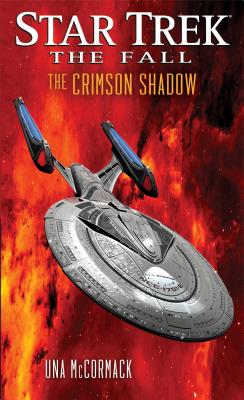 The second original novel in the electrifying The Next Generation/Deep Space Nine crossover event!

Cardassia Prime is home to a prideful people who, for centuries, forged alliances with those they believed would strengthen them and their place in the Alpha Quadrant, and expanded their empire at great cost to other worlds. For generations, dissenting voices were silenced by either fear or an early grave. When their wartime ally, the Dominion, suddenly turned on them, seeking to transform Cardassia into a tomb for every last member of their race, their old adversary—the United Federation of Planets— put an end to the carnage, and even now works to help rebuild Cardassia Prime.

To celebrate this alliance, the Castellan of the Cardassian Union is to welcome the Federation president to Cardassia Prime. As a symbol of this deepening friendship, the U.S.S. Enterprise-E is tasked to carry the Cardassian ambassador to the Federation back home. For his part, Ambassador Elim Garak is working with Captain Jean-Luc Picard to oversee the diplomatic reception that will commemorate the last of Starfleet’s personnel finally leaving the homeworld. However, there are malevolent forces at work, who even now strive to “restore Cardassia to its proper place and glory,” and are willing to do anything to achieve their goal....

Una McCormack is the author of eight previous Star Trek novels: The Lotus Flower (part of The Worlds of Star Trek: Deep Space Nine trilogy), Hollow Men, The Never-Ending Sacrifice, Brinkmanship, The Missing, the New York Times bestseller The Fall: The Crimson Shadow, Enigma Tales, and The Way to the Stars. She is also the author of four Doctor Who novels from BBC Books: The King’s Dragon, The Way Through the Woods, Royal Blood, and Molten Heart. She has written numerous short stories and audio dramas. She lives with her family in Cambridge, England.
Loading...
or support indie stores by buying on