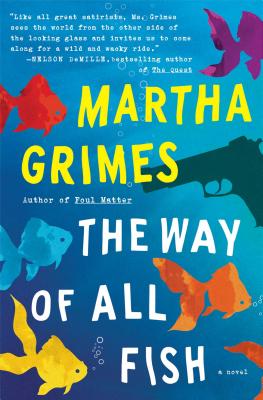 The Way of All Fish

Writer Cindy Sella is having trouble with her new novel. Aside from her paralyzing writer’s block, she’s faced with a lawsuit from her ex-agent, L. Bass Hess. Hess will stop at nothing to collect a commission from Cindy on her previous novel, which he did not represent since she had fired him long before it was published.

Hitmen Candy and Karl—first introduced in Foul Matter—are asked to “get rid” of L. Bass Hess. They join forces with a publishing mogul, a bestselling author, an out-of-work Vegas magician, an alligator wrangler, a glamorous Malaysian con lady, and Hess’s aunt in the Everglades who has undergone a wildly successful sex change, and concoct a plan to save Cindy Sella from the odious machinations of Hess by driving him (slowly, hilariously) crazy.

Grimes’s fans will delight in the return of several colorful characters from Foul Matter, including Senior Editor Clive Esterhaus, unprincipled publisher Bobby Mackenzie, and ex-mobster and author Danny Zito, currently under the witness protection program. New readers will find that these characters and their escapades shed an amusing light on the New York publishing scene. Informed and influenced by the author’s own publishing adventures, “The Way of All Fish is a goofily offbeat delight” (The Washington Post).

Praise For The Way of All Fish: A Novel…

“This sequel to Foul Matter is a caper that casts an eye on publishing that is comic, caustic, and relentlessly readable.Yes, it's Grimes lite and probably as much fun for the author as it is for herreaders.”
— Booklist

“This novel is a madcap mystery with delight.”
— BookPage

“This sendup of the book world, in which hit menapparently have more integrity than publishers, is great fun.”
— Kirkus

Martha Grimes is a very funny writer and TheWay of All Fish is a hilarious and worthy sequel to her bestselling FoulMatter. Like all great satirists, Ms. Grimes sees the world from the other side of the looking glass andinvites us to come along for a wild and wacky ride. A very entertainingand fun read.
— Nelson DeMille, bestselling author of The Quest

Few people have ever succeeded in making book publishing of all things seem funny and suspenseful, but Martha Grimes does so brilliantly in The Way of All Fish.
— Michael Korda, author of Another Life

"Martha Grimes is back with a deliciously hilarious send-up of the book business. The Way of All Fish nails all the foul matter of publishing dead on, and is a smashingly great read as well."
— Linda Fairstein

Bestselling author Martha Grimes is the author of more than thirty books, including twenty-two Richard Jury mysteries. She is also the author of Double Double, a dual memoir of alcoholism written with her son. The winner of the 2012 Mystery Writers of America Grandmaster Award, Grimes lives in Bethesda, Maryland.
Loading...
or support indie stores by buying on