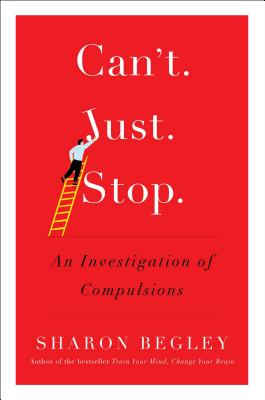 An Investigation of Compulsions

The first book to examine the science behind both mild and extreme compulsive behavior—using fascinating case studies to understand its deeper meaning and reveal the truth about human compulsion.

Whether shopping with military precision or hanging the tea towels just so, compulsion is something most of us have witnessed in daily life. But compulsions exist along a broad continuum, and at the opposite end of these mild forms exist life altering disorders.

Sharon Begley’s meticulously researched book is the first of its kind to examine all of these behaviors—mild and extreme (OCD, hoarding, acquiring, exercise, even compulsions to do good)—together, as they should be, because while forms of compulsion may look incredibly different, these are actually all coping responses to varying degrees of anxiety.

With a focus on personal stories of dozens of interviewees, Begley employs genuine compassion and gives meaningful context to their plight. Along the way she explores the role of compulsion in our fast paced culture, the brain science behind it, and strange manifestations of the behavior throughout history.

Can’t Just Stop makes compulsion comprehensible and accessible, exploring how we can realistically grapple with it in ourselves and those we love.

Praise For Can't Just Stop: An Investigation of Compulsions…

"Begley, a senior writer at The Boston Globe’s life sciences publication Stat, is among the best there is at translating complex science for a general audience. On the whole, Can’t Just Stop is fast-paced and engaging without being simplistic, and Begley shows admirable restraint in eschewing news-you-can-use prescriptions for how to improve your productivity or otherwise better your life."
—The New York Times Book Review

"A fascinating read about human behavior and how it can go haywire."
—The Charlotte Observer

"In this fascinating read, Begley combines a personal topic with thoughtfulness and sensitivity. Recommended for anyone interested in learning more about compulsive behavior."
—Library Journal

"Begley's final chapter on brain function in the compulsive mind contains fresh insight that could fundamentally alter how we think of, and treat, mental illness going forward."
—Publishers Weekly

"Sharon Begley has done us all a service, writing about compulsion without writing about disease and offering a new perspective on a phenomenon that is common if not universal. People troubled by their own compulsive behavior will appreciate her nuanced and balanced approach and perhaps come away with a new understanding of themselves."
—Gary Greenberg, THE BOOK OF WOE: The DSM and the Unmaking of Psychiatry

"Sharon Begley is the liveliest science writer around. Can't Just Stop offers both a state-of-the-science look at compulsions (and who doesn't have some?) and a delightful read."
—Daniel Goleman, EMOTIONAL INTELLIGENCE: Why It Can Matter More Than IQ

"Filled with emotionally resonant stories, Can't Just Stop helps us understand not only the underpinnings of some forms of mental illness, but also the everyday worries that drive so much of our behavior. A fascinating peek into the human mind in our age of anxiety."
—David Kessler, author of CAPTURE: Unraveling the Mystery of Mental Suffering

"At once fascinating and compassionate, funny and informative, this volume should be on the bookshelf of every psychiatrist, and on the nightstand of anyone who enjoys absorbing and incisive writing."
—Joel Gold, M.D., author of SUSPICIOUS MINDS: How Culture Shapes Madness

Sharon Begley is the senior science writer at STAT, the life sciences publication of The Boston Globe. She previously worked at Reuters, Newsweek, The Daily Beast, and The Wall Street Journal. She is the author of Can’t Just Stop; The Emotional Life of Your Brain (with Richard J. Davidson); Train Your Mind, Change Your Brain; and The Mind and the Brain (with Jeffrey Schwartz). She has received numerous awards for communicating science to the public.
Loading...
or
Not Currently Available for Direct Purchase