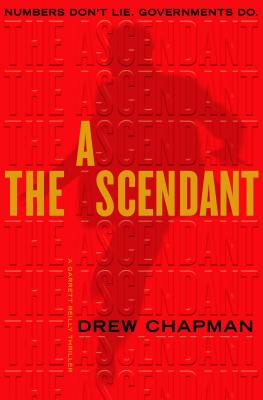 “A ruthless entity has declared war on America, not through military attacks or terrorist activities but by targeting our economy. Two hundred billion dollars in U.S. Treasury bonds are sold off, precious natural resources are destroyed, our power grid is sabotaged, and the real estate market is gutted when property is sold for cutthroat prices. Only one man, Garret Reilly, a trading prodigy who has an uncanny ability to recognize patterns, has a sense of what is being perpetrated and who is behind it. Chapman has created a brilliant, gripping thriller that is all the more frightening in its distinct possibility!”
— Jerry Brown, The Bookstore, Radcliff, KY
View the List

Hidden deep within the figures tracking the ups and downs of the stock market lies a terrifying truth: America is under attack. Our government . . . our economy . . . our very way of life are in the crosshairs of a ruthless enemy . . . and no one knows. Except Garrett Reilly. He has a knack for numbers. He sees patterns no one else can. His gift has made him a rising star on Wall Street. But when he notices that two hundred billion dollars’ worth of U.S. Treasury bonds are being sold off at a terrifying rate, his gift makes him the most wanted man alive.

The U.S. military wants him for his extraordinary abilities. They need someone to lead a crack squad of rogue soldiers to act as the last line of defense in a war that could mean the end of everything America holds dear. And everyone else? They just want him dead.

In this explosive debut novel, ranging from the offices of Wall Street to the casinos of Vegas to the back roads of the Chinese countryside, Drew Chapman introduces readers to a new kind of action hero: one uniquely skilled to fight a new kind of war.

Praise For The Ascendant: A Garrett Reilly Thriller…

“Like his intriguing protagonist Garrett Reilly, author Drew Chapman possesses startling skills and this first novel just blows the doors off. The Ascendant is a rollicking, globe-hopping, timely and prescient page-turner—a Twenty-First Century thriller that once begun refuses to yield or loosen its grip on the reader. A stunning debut.”
— C.J. Box, New York Times bestselling author of Breaking Point

“Political thriller? International thriller? Financial thriller? Whatever you call it, The Ascendant is smart, edgy, fast-paced storytelling at its best. Its unlikely hero, Garrett Reilly, reminded me of a young Jack Reacher as a tech-savvy bond analyst. Drew Chapman is a debut novelist to watch.”
— Alafair Burke, bestselling author of If You Were Here

“From its first page, The Ascendant pulls you into a compellingly suspenseful story, and delivers it at a break-neck pace. Drew Chapman demonstrates the assured hand of an author on his twentieth novel, not his first. I couldn’t put it down!”
— Alex Grecian, New York Times bestselling author of The Yard

"Fans of Homeland and 24 will love The Ascendant--a rocket of a thriller that's fresh and cool and totally real."
— Joseph Finder, New York Times bestselling author of Paranoia and Buried Secrets

“Reilly’s reluctance to help fight off these attacks adds to the edginess of this page-turner that seems frighteningly realistic as Chapman uncovers new parameters for how war might be waged in our brave new world.”
— American Way Magazine